The interesting thing I have discovered while researching - firstly; who was trying to 'Silence' my husband, Dr Gary Fettke from talking about LCHF, and secondly; the Evolution of the 'Plant-Based' dietary guidelines, has been the influence of the Adventist Church on our dietary and health guidelines and Lifestyle Medicine's unusual partnership with Coca-Cola, considering 'Lifestyle Medicine' is based on Adventist Health Reform principles that are anti any sort of stimulants, including caffeine.

I started out questioning 'why' the highest profile Nutritionist in the South East Asia and Pacific region was called in as the expert witness for the Australian Health Practitioner Regulatory Agency (AHPRA) in Gary's 2014 investigation after being reported to the medical board by a dietitian at the hospital he was working at.

Surely, I thought, Professor Mark Wahlqvist was 'slightly' overly qualified to be deciding whether an orthopaedic surgeon, based in a small rural community in Northern Tasmania (with a Facebook following of around 5,000 people) was outside his 'scope of practice' for recommending that his patients with complications of diabetes, and the general public who chose to follow him on social media, reduce their sugar consumption and processed carbohydrates, and eat fresh, seasonal, whole foods including animal proteins and fats, based on biochemistry and the KREBS Cycle, something Gary learnt in first year medical school?

I never expected the expert witness for the Medical Board of Tasmania under the umbrella of the Australian Health Practitioners Regulation Agency (AHPRA) to lead me to the Seventh-day Adventist Church, Lifestyle Medicine and ILSI.

I discovered that Mark Wahlqvist worked for Sanitarium, a wholly owned Seventh-day Adventist Church processed food company at the time of Gary's investigation in 2014; his textbook, Food and Nutrition, used in the study of nutrition and dietetics around Australia, and many of the SDA Church health programs, is pro-vegetarian.

Mark Wahlqvist was involved in Lifestyle Medicine (LM) not only as an international speaker but also on an LM Advisory Board in 2015 with Garry Egger, founder of the Australian Lifestyle Medicine Association (ALMA). He is based at Zhejiang University as a visiting professor in Medicine - the only University I have found actually partnering with Adventist Church's Loma Linda University in the whole of China, and his wife, Meei Shyuan Lee, was/is 'currently spearheading research in Taiwan' for ILSI, the International Life Sciences Institute founded by Alex Malaspina in 1978, as then Vice President of Coca-Cola.

When Gary and I brought the potential Conflicts of Interest up with the Medical Board they dismissed them.

I can't stay silent, but I try to be respectful.

I believe that Lifestyle Medicine's partnership with Coca-Cola has had some uncomfortable moments. Why else would the European Society of Lifestyle Medicine (ESLM) completely wipe their website of all content in November 2015, the same month Coca-Cola's Global Energy Balance Network (GEBN) folded, if they weren't trying to hide their association?

I don't know about you, but I have so many questions... 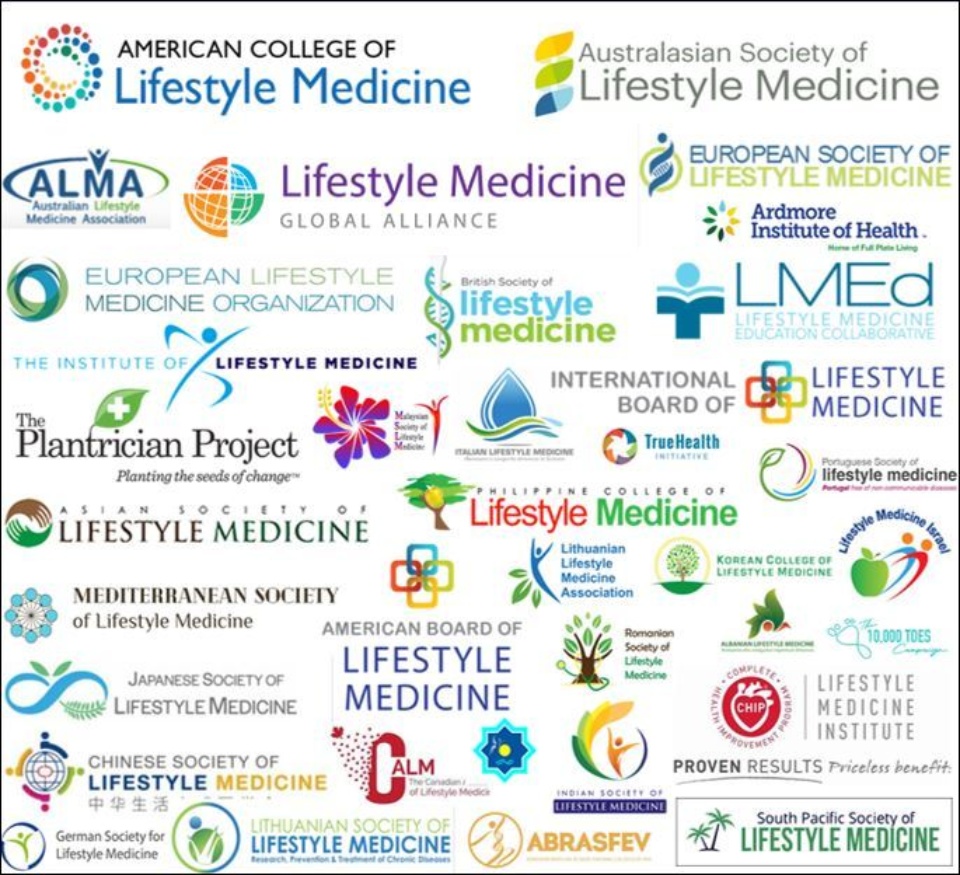 'Novel partnerships' between Coca-Cola and Lifestyle Medicine appeared soon after Exercise is Medicine's (EIM) Steven Blair and Edward Phillips became Advisory Board members of the American College of Lifestyle Medicine (ACLM) in 2010.

Please note, Coca-Cola’s entire family of brands is acknowledged as a platinum sponsor for ACLM's ‘Treating the Cause’ in 2012, with the Adventist CHIP program on the sponsor page, too.

James Rippe, based at the Adventist Celebration Hospital in Florida, wrote the very first textbook on Lifestyle Medicine in 1999. It appears he has been involved in 'industry-friendly' research for decades. The panel members he interviewed at the 2013 American College of Lifestyle Medicine's Treating the Cause conference/workshop included dietitian Rosanne Rust (with known ties to Coca-Cola) and Steven N. Blair who later became Vice President of the now defunct Global Energy Balance Network (GEBN).

Gregory Hand, a presenter on the ESLM May 2015 Webinar, and one of the key influencer's of the GEBN together with Steven Blair, co-authored a paper on ‘Energy Balance’ with then President of the European Society of Lifestyle Medicine, Michael Sagner MD. 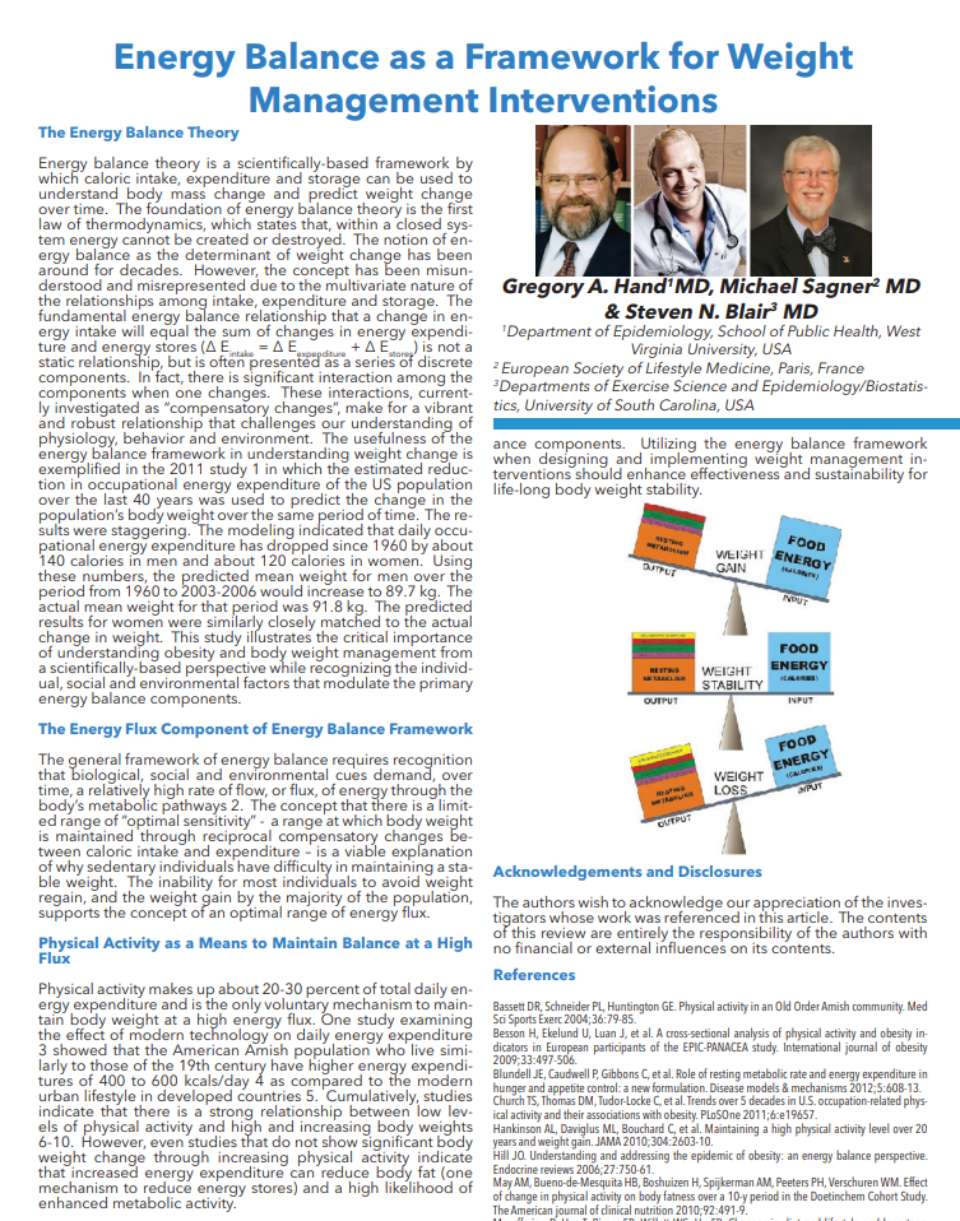 The Global Energy Balance Network (GEBN) was designed to recruit ‘hundreds of scientists’ into a group that could act as "a reliable and trusted source for a balanced, science-based view" while "promoting collaboration between industry and government” according to emails obtained by U.S. Right to Know. Emails revealing that Coca-Cola proposed, and financed, the Global Energy Balance Network as a “weapon” in the “growing war between the public health community and private industry” over obesity and the obesity epidemic.

*May 2015 - GEBN partners with European Society of Lifestyle Medicine (ESLM)

The Critical Public Health paper authored by Gary Ruskin (US Right to Know) explains “how Coke and the food industry manipulate external organizations 'like pawns on a grand political chessboard' to defeat public health forces by co-opting academic contacts, infiltrating major scientific bodies and medical associations, and influencing the generation of scientific evidence."

"GEBN insisted the $1.5 million start-up received from Coca-Cola had no influence on its work, but the emails obtained by The Associated Press show just how instrumental Coca-Cola was in shaping it…

"In an email exchange dated Oct.16, 2012, with the subject line "Ready for a stimulus pkg?" Rhona Applebaum (then Coca-Cola’s Chief Scientific Officer) tells James O Hill that she has "sold the concept" of what would become the Global Energy Balance Network. She later informs him those involved will need to be open to collaboration with private industry.

"Private industry collaboration... "That is non-negotiable," she says.

"She emailed the group on July 9, 2014 with a "tweaked" proposal to "inject sanity and reason" into the obesity debate and become the go-to resource for media.

"In a later email exchange dated Oct.14, 2014, about the GEBN potentially partnering with others on a project, Rhona Applebaum writes: "There you go! Then the numbers of experts and reputable orgs is too large for any naysayers to cull the pack and attack.""

Was the partnership referred to in the conversation above the European Society of Lifestyle Medicine (ESLM) as part of the Global Lifestyle Medicine Alliance (GLMA)? It would certainly have given them enormous leverage if that was the case. Was it the GLIMMER of hope David Katz wanted?

The GEBN’s message was to be promoted via an extensive advocacy campaign linking researchers, policy-makers, health professionals, journalists and the general public. Ultimately, these activities were intended to advance Coca-Cola’s corporate interests: as they note, their purpose was to ‘promote practices that are effective in terms of both policy and profit’.

But, Rhona Applebaum was wrong. The GEBN had the rug pulled out from under it before it became too big and the 'naysayers' alerted the world to what was happening. Incredibly, the 'naysayers' managed to ‘cull the pack’!

The Global Energy Balance Network (GEBN) was shut down after the press revealed the extent to which Coke controlled its operations... The European Society of Lifestyle Medicine (ESLM) also disappeared at the end of 2015, completely wiping the website of all previous content.

There was certainly a shuffle of board and advisory members around this time with many leaving including; Founding Board member Seventh-day Adventist Dr Chidi Ngwaba; 'UK's highest profile Lifestyle Doctor'. President of ESLM Dr Michael Sagner went on to found the European Society of Preventive Medicine (ESPREVMED) taking ESLM Advisory Board member Dr Steven Blair with him. Steven Blair remains on the American College of Lifestyle Medicine's Advisory Board.

The American College of Lifestyle Medicine

The College made some serious changes in administration, to add credibility to the movement, developing new resources and creating new partnerships in 2010. As mentioned previously, the changes included the appointments of Steven Blair and Edward Phillips to the ACLM Advisory Board, the AMA endorsing 'Competencies in Lifestyle Medicine' and the support of the American College of Preventive Medicine (ACPM). The culmination of the changes were significant when you consider the growth in membership, numbers in attendance at Lifestyle Medicine events, and the increased activity on the website (highlighted below) from the movements’ Adventist roots as a Christian Association in 2002/2003.

Embracing the Exercise is Medicine™ initiative, and encouraging broader partnerships and industry sponsorship, increased the American College of Lifestyle Medicine’s presence and in turn, their sphere of influence. The introduction of the recent LMEd Collaborative medical curriculum into Loma Linda, Harvard, South Greenville and Stanford Universities has provided a secular platform for Coca-Cola's Energy Balance model AND the Adventist Health Reform principles. This partnership has created an unprecedented opportunity to deflect concerns from the harms of sugar and evangelise the ‘Plant-based' Garden of Eden diet to a very receptive audience - medical students.

Will the next generation of health professionals be educated to fear not only animal fats but animal proteins, too? Will they learn to write Energy Balance prescriptions to encourage people to 'move more, eat less...meat' without understanding why?

“It's wonderful to see ACLM moving forward. As a reminder, a year ago when I became ACLM president) I set forth three goals: 1. Make ACLM an organization that will involve members… where they can help fulfil their professional agendas. 2. Develop our collaborators and partners. This is also moving forward strongly, both with ACPM and multiple other professional and commercial LM organizations. 3. Move special initiatives forward. We are also seeing success here, the most significant being the publication of a set of Lifestyle Medicine competencies in the July 14, 2010 issue of JAMA.

Hopefully you can begin to understand why I don’t recommend; attending, speaking at, becoming a member of, or attaining board certification in Lifestyle Medicine’s Global Alliance or any of its 'sister organisations’. I remain very concerned about their partnership with Coca-Cola and the fact that they are founded on religious ideology with an anti-meat agenda.

​ The 'plant-based' Garden of Eden diet is non-negotiable.

I can assure you I am not opposed to the concept of 'Lifestyle Medicine' and I honestly believe there are people within the movement who are truly invested in improving health outcomes, if only it wasn’t making people dependent on processed fortified high carbohydrate foods and supplementation that this way of eating encourages.

I respect choice and religious liberty.

If people choose to be Seventh-day Adventists, and choose to follow the dietary restrictions necessary for spiritual and moral  purification, if they choose to identify as an Adventist by their dietary choices, and if they find health benefits in the Garden of Eden diet then who am I to judge?

Equally, I expect my choice of beliefs and values to be respected. Our world is about diversity and inclusion. I choose to follow Low Carbohydrate Healthy Fat principles and include animal fats and proteins in my diet. The wonderful thing about LCHF and Keto is that they are flexible and can support any eating pattern. It is easiest as an omnivore but LCHF can be adapted for people who choose more fibre or less, more animal fats and proteins, or plant-based options with supplementation.

As Gary says "our mitochondria are the engines of our cells and they don't care where the fuel comes from. We make it difficult for ourselves because we add emotion to our dietary decision making."

If you strip nutrition back to basics and eat fresh, seasonal whole foods, with minimal processing, then you have the ability to take back control of your health.

Nutrition Science... How did we get here? Belinda Fettke LCDU 2019