Not sure if you saw the plant-meat news/advertorial splashed across various news platforms last week?

With concerns over meat supply during lock-down, it could be time to try alternatives.

If so, you could be forgiven for thinking we should all be turning to plant-based alternative meats not only for their supposed exceptional nutritional qualities but also, because of the fear that our meat supply may become an issue...

Plant-based meats present Australia with a multi-billion dollar opportunity. Will we seize it?

The claim coincided with the release of Food Frontier's 2019 collaborative report with Life Health Foods, an alternative protein/meat company wholly-owned by the Seventh-day Adventist Church (under the umbrella of the Australian Health & Nutrition Association LTD trading as Sanitarium Health and Wellbeing Company) well known for its pro-cereal/grain/soy and anti-animal protein/fats messaging.

Plant-based meats do not present the same foodborne illness risks; links to the rise of zoonotic disease and antimicrobial resistance; and factors believed to contribute to colorectal cancer, cardiovascular disease and type 2 diabetes - diseases that are among the leading causes of death in Australia

My concerns with 'plant-biased' messaging have always centred on the Vested Interests and Religious Ideology shaping them and a lack of transparency in regards to commercial and/or personal/professional bias as an influencer. Unfortunately, this latest media promotion appears to be no different.

Food Frontier's 2019 report highlights the projections they determined could exist for vertically integrated businesses involved in fake meat production and the 'billion dollar prize' achievable, if only they can (my interpretation):-

* attract investors to the potential billion dollar industry in Australia

* influence governmental policy and support for the fake meat industry

* while failing to mention that the most common food allergies, including anaphylactic shock, come from plant foods

It may be surprising to consider that the most common food allergies come from plant-based foods, those that in the collective imagination are associated with “healthy eating"

"Then there are plant extracts such as isolated pea protein and isolated soy protein, used for their consistency in the production of meat substitutes, with the claim of replacing it."

The Sydney Morning Herald article states:- "Food Frontier is independent from the food industry (Me - but they collaborated with Life Health Foods!) and is funded by donations from individuals and foundations that support sustainable food systems (whom they don't disclose).

Considering their collaboration with Life Health Foods it is only fair to consider the Adventist Church may be one of Food Frontier's philanthropic donors? Happy to be advised otherwise...

And that's what Think Tanks, PR firms, and Food Industry do. They provide professional reports, sell a concept, and profit from processed food sales.

I have no doubt that the CEO and founder of Food Frontier is a passionate entrepreneur and sincerely believes the science of processed plant proteins, and cell cultures, is the future and he's excited to be a part of it.

I have no doubt the CEO and founder of FoodBytes, after having worked for Nestle for 10 years, has lots of experience developing and marketing strategies acknowledged by Dairy Australia and the successful campaign she created for them.

Likewise, a food industry such as Life Health Foods, Australia's largest manufacturer of alternative meat analogues including;- Alternative Meat Co, Vegie Delights and Bean Supreme owes its success to innovation and making a profit from sales, and they claim to be doing just that... In fact, they are "Reaping the benefits of an increasing number of people choosing a plant-based diet" with "Millennial's looking for world solutions."

Headlines claiming alternative meat is better than red meat are false and misleading statements. While they do acknowledge in 'fine print' that they are comparing 'animal counterparts' and I appreciate there are some not so healthy processed meats on the market, the headlines say "RED MEAT".

To suggest that we should consume fake meat because it is a source of dietary fibre is just ridiculous! We certainly don't need to eat fake meat to get fibre... How about we just eat real meat and veg and ditch the processing altogether? Is fibre even necessary in our diet? I urge you to take a look at Dr. Zoë Harcombe's talk - 'What about fiber?' and decide for yourself...

The Food Frontier/Life Health Foods survey, 2019, on just 1,393 people in Australia was extrapolated and modeled (somehow) to conclude that one in three people have tried alternative plant-based meat. To put this in perspective, that's just 0.00005 of our population which I would challenge as being statistically insignificant.

Leveraging off health claims that 'meat causes cancer, cardio vascular disease and Type 2 diabetes' is just wrong. All the studies I have come across supporting this notion are authored by people with ties to industry and/or people with an ethical or religious bias. I have written extensively on this subject, best addressed in the article I wrote summarising my talk in Spain:- "Lifestyle Medicine ... where did the meat go?" in 2018. Gary's talk in 2017 delves into the Adventist Health Studies bias as does Prof William T Jarvis in the article "Why I am not a vegetarian."

Aligning their report on a nutrient deficient 'Planetary Health Diet' based on the 2019 EAT-Lancet report, is a serious cause for concern as I summarise in my article "Is the EAT-Lancet Rule-Book Hijacking Our Health?"

But for me, the very last straw was the media stories claiming equal and/or higher Heath Star Ratings for processed, fortified alternative plant-based meats over 100% minced red meat, penalised for its natural saturated fat content!

I wonder how many people are aware that Sanitarium was part of the working group that helped develop the Health Star Ratings and was one of the first companies to publicly get behind them. Sanitarium's Technical Advisor sits on the HSR Expert Technical Advisory Committee and helped design the Algorithm's that allocate stars depending on the fibre, sugar, salt and saturated fat content of processed foods? In my mind that is a huge Conflict of Interest...

Sanitarium and it's sister company Life Health Foods come under the umbrella of the Seventh-day Adventist Church's charity status and as such, pay no tax on any of the profits from sales of the hundreds of commercially processed 'foods' they produce. Nor do they pay tax on any investments or business entities which come under the Sanitarium branding which includes the Complete Health Improvement Program (CHIP) - a wellness program delivered to Churches, Communities and as Corporate Wellness Programs world-wide.

While the Church acknowledges that diet is not a mandate for membership, the following resource from the CHIP facilitator guide shows pretty clearly what the Adventist Church's position is on Meat, Dairy and Eggs...

"We promote that less is more with the ideal being none at all, if you want to avoid the worst possible health outcomes."

The 2020 Report was authored by Teri Lichtenstein, founder and director of FoodBytes, a nutrition marketing consultancy that claims:- "We know our nutrition stuff, but more importantly, we know how to communicate it in the right way to the right type of audience. All our services evolve around credible nutrition communications that will achieve engagement with your audience and resonate to achieve an impact."

Offering services that include:-

*Media spokesperson to represent a brand and assist with PR initiatives

According to Food Frontier’s research:- "plant-based meat alternatives have evolved from traditional options like lentil-based veggie burgers to a new generation of products that aim to mimic the sensory experience of the meat most people grew up enjoying.

"The consultancy firm anticipates that booming demand is set to put a rocket under the current market - Australians currently spend $150 million a year on plant-based products but could spend as much as $4.6 billion by the end of the next decade, according to the new estimates.

"For that scenario to materialise, however, both the public and private sectors will need to sink their teeth into the opportunity.

"Australia needs to act quickly to stake its claim in the global plant-based meat sector or risk being left behind by its competitors.

"Support from government and investment by business is urgently needed to drive nationwide job growth and the economic benefits projected over the next decade, ensuring a robust and competitive plant-based meat industry into the future." Food Frontier CEO Thomas King, pictured below with a group of vegan leaders at the 2018 Nexus Global Summit, including Gunhild Stordalen, founder of EAT, whose strategic partners include Novo Nordisk.

I have written extensively about the EAT-Lancet Planetary Health diet and shared my concerns here.

The conclusion accompanying the photograph below states... "The food world is certainly in transition, and there’s no doubt these young leaders will see it through until we reach a completely plant-based future." 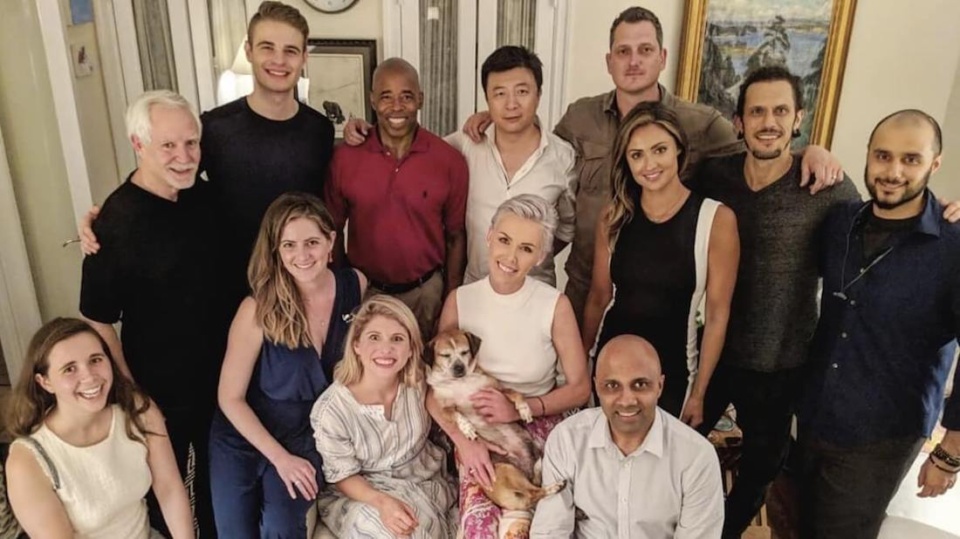 So was all this really 'News' or simply a well placed 'Advertorial'?

You know what I think...

Our health is being compromised by industry protecting their profits and their prophets and I am not OK with that.