What's the Catalyst for Type 2 Diabetes? - Cereal of course!

I have so many amazing and inspiring posts to share but this one has to be today because I am concerned that the ABC's Catalyst program, Beating Diabetes, airing at 8.30pm tonight will promote a 'plant-based' dietary intervention for Type 2 diabetes (ie 'pro cereal/grains and anti-animal protein and fats), disregarding the extensive research compiled by Virta Health supporting the health benefits of Low Carb and LCHF principles, especially in the management of Type 2 diabetes which is regularly referred to by dietitians as a Fad diet!

Please check out my concerns after watching the program, as there are some serious issues that I discuss at the end of this article, including the possibility that there has been doctoring of blood glucose levels and misinformation about blood glucose spikes from white and wholegrain bread. 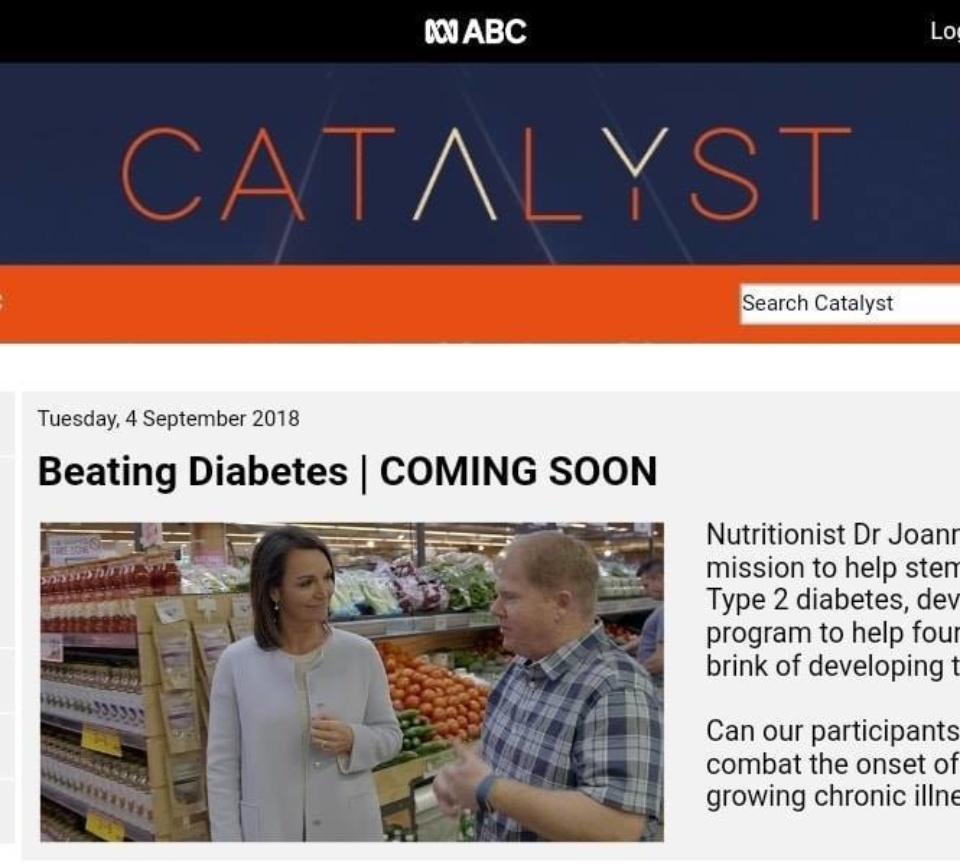 Joanna not only MC's at ASLM conferences, but also presents. The company's she works for sponsor ASLM - Freedom Foods (breakfast cereals) and Cobram Estate.

In fact, when you find media releases like this one how can you expect a balanced discussion on Low Carb? "Dr Joanna McMillan, Grains & Legumes Nutrition Council (GLNC) and Tip Top Bakeries have joined forces to help bust common myths and encourage the nation to embrace a sensible, long-­term approach to healthy eating."

The American College of Lifestyle Medicine (of which ASLM is a global partner) was founded by Adventist Dr John Kelly.

Did you happen to see my recent article on Ellen G White, founder of the Adventist Church and her Health Reform Prophecies that 'eating fruit, grains, vegetables and nuts, is the God Given diet for man?

Hence, Ellen G White's protege, Dr John Harvey Kellogg, was immersed in Adventist beliefs at home and also typesetting for the Church's publications on the Prophecies of Ellen G White's Health Reform Visions (including diet and 'self-vice') from the age of 12!!

John Harvey Kellogg went on to invent Kellogg's Cornflakes, which became a breakfast cereal empire. He created nut butters and fake meat analogues to cater for the Church and to feed guests and patients at the Battle Creek Sanitarium.

Anyway, back to Lifestyle Medicine...

Dr George Guthrie, a Seventh-day Adventist and current president of the American College of Lifestyle Medicine posted in August 2018:-

The American College of Lifestyle Medicine's Board recommends as the dietary “North Star” to which humans should strive: for the treatment, reversal and prevention of lifestyle-related chronic disease, the ACLM recommends an eating plan based predominantly on a variety of minimally processed vegetables, fruits, whole grains, legumes, nuts and seeds.”

"ACLM’s Board recommends as the dietary “North Star” to which humans should strive: for the treatment, reversal and prevention of lifestyle-related chronic disease, the ACLM recommends an eating plan based predominantly on a variety of minimally processed vegetables, fruits, whole grains, legumes, nuts and seeds.”

'Time and space do not allow a full review of this evidence. But we can say with a reasonable amount of certainty that eating animal protein as the primary source of protein is detrimental to health.'

Is veganism being promoted from religious ideology?

An ideology that appears to be a big part of the reason Gary has been 'Silenced' from advocating Low Carbohydrate Healthy Fat principles to his patients despite improving their health outcomes!

We need to keep challenging Medical Evangelism and the influence of the Corporate Adventist Church, and other Vested Interests involved in shaping our dietary and health guidelines.

There is no one size fits all. Diet is complex especially when you take into account culture and ideology.

While I truly respect each individuals belief and personal choice, there needs to be disclosure of ideology/beliefs and of Vested Interests when creating guidelines and policy around nutrition and health. Otherwise it isn't fair ...

Misinformation ... deliberately misleading the public or not?

Have the blood glucose reults shown during the airing of the Catalyst program 'Beating Diabetes' been doctored? 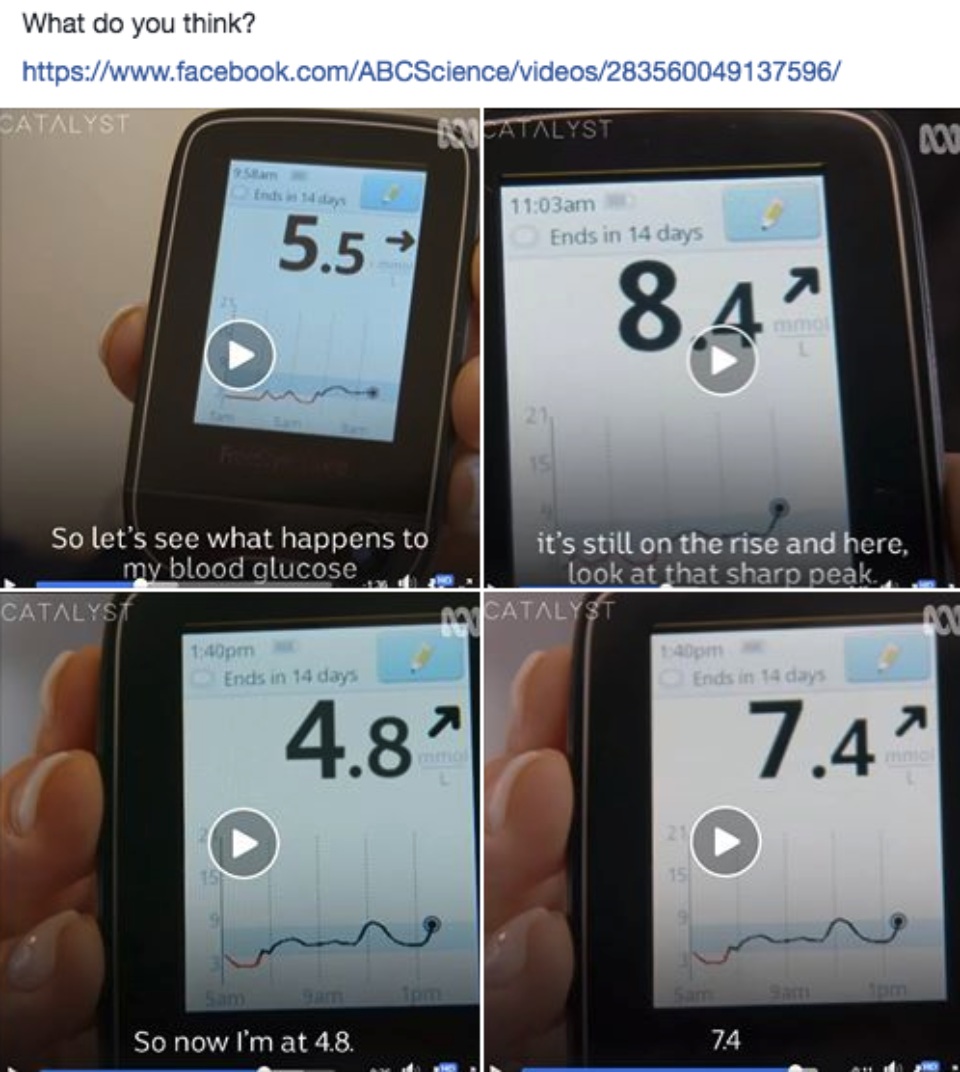 I have been alerted to some worrying images following the airing of ABC's catalyst program on Tuesday night. Take a close look at the hand position of the 3rd and 4th image and also the time captured in the top left corner ... 1.40pm, but two different blood glucose readings.

If this has been doctored it isn't fair. How many people watched the program?

Another important issue (as Richard Morris kindly pointed out on Facebook) Joanna McMillan's argument was "that the higher GI food in the first meal (vegemite on white bread) caused a higher increase in glucose than the blood glucose increase caused by the lower GI meal (smashed avo on wholegrain bread).

But really ... there was an almost identical glucose increase for High and Low GI toasts!! (The other thing to consider is the Wholegrain bread had smashed Avocado which is chock full of healthy fats and may well have slowed the glucose spike.)

Dr McMillan PhD may need to brush up on her math." 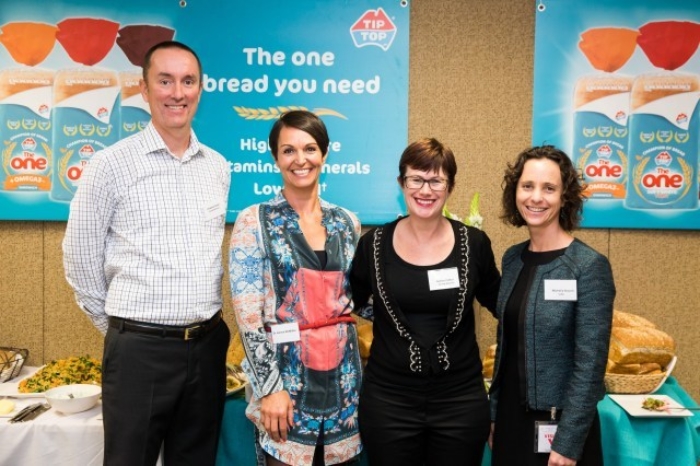 Not declaring conflicts of interest with the food industry as a presenter of the program was bad enough, but if these results have been doctored and mislead viewers, then serious steps need to be taken to find out who was responsible. I have alerted ABC's Catalyst program and Media Watch. If you feel strongly enough please contact them, too.