Some days are very humbling and the 30th of January 2020 was definitely one of them.

Gary and I sincerely thank Annabelle Williams for her 'Letter to the Editor', published in the Examiner Newspaper, commenting on the anti-sugar messaging from the recently awarded Australian of the Year as being the same message Gary has been advocating for over 8 years in Tasmania.

We too, offer our congratulations to all those who were acknowledged in the Australia Day Awards - both in Tasmania, and around Australia.

Congratulations also, to my brave husband - Dr Gary Fettke - for being remembered as a thought leader in our community. I am so proud of him for refusing to back down on raising awareness of the harms of sugar and processed carbs, despite intimidation and bullying in the workplace and being threatened with deregistration by the medical board of Tasmania... for advocating something that will hopefully now become mainstream in medicine. 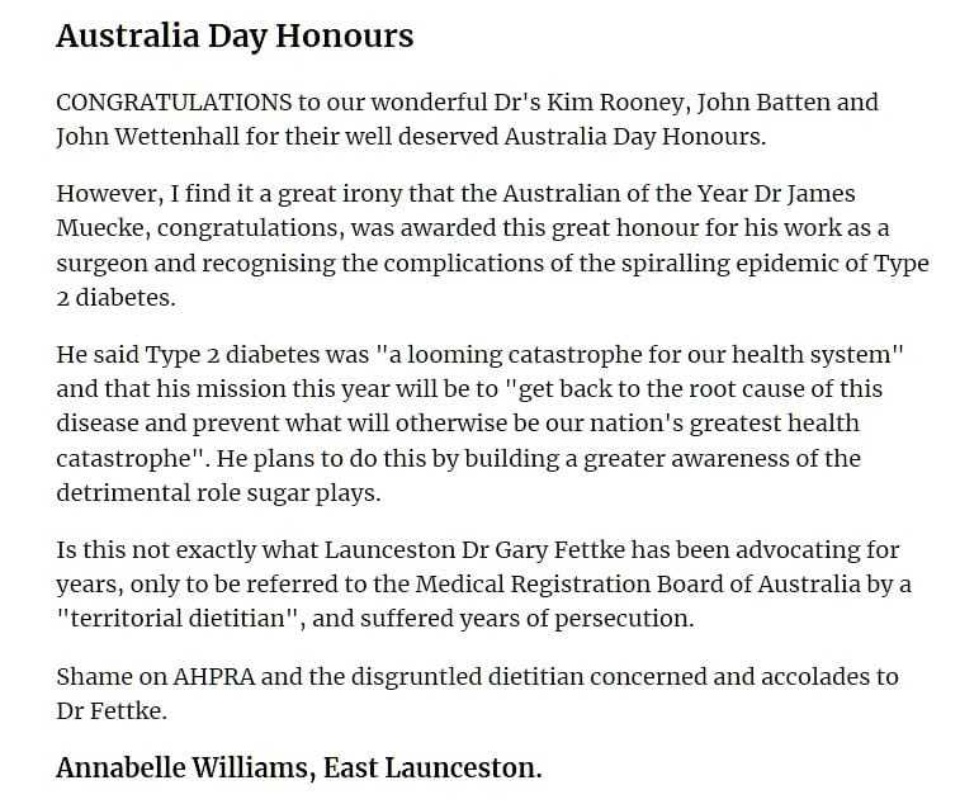 2020... What an auspicious year for an ophthalmologist to be awarded Australian of the Year

Dr James Muecke has stated from the outset that he is going to use the platform this award has provided him to raise awareness about the harms of sugar and refined/processed carbohydrates, especially in the management of Type 2 Diabetes.

In an interview with the team on Sunrise he spoke of his belief that Carbohydrate Addiction falls under a *Human Rights* issue because most people are not told that sugar and refined carbohydrates are addictive. 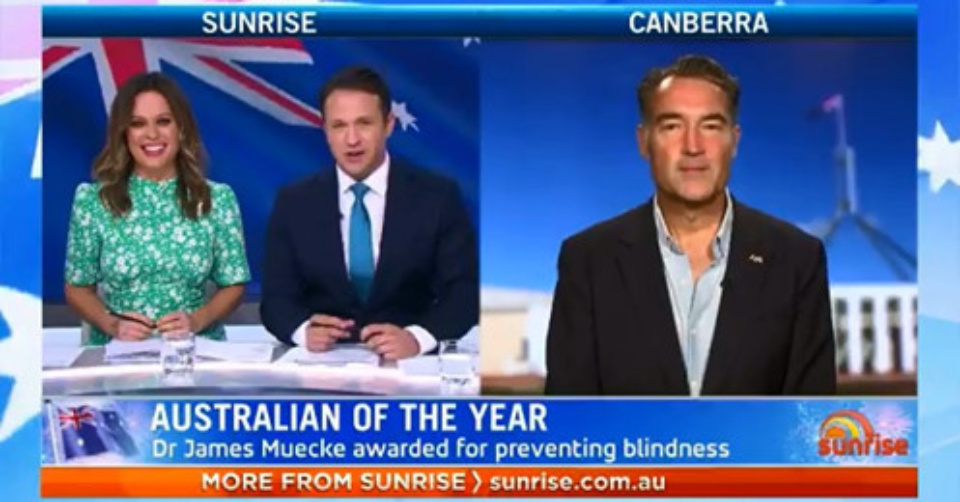 What we should be doing is going right back to the start and saying what's causing type 2 diabetes - and that it's a dietary disease due to consumption of too much sugar and refined carbohydrates in processed food.

Gary has been challenging this same concept for a long time. But, how can the public know about the harms of sugar when;-

* Coca-Cola pushes the 'energy balance model' of obesity and metabolic disease telling people they have to 'move more and eat less'? #exerciseismedicine

* The Dietitians Association of Australia (DAA) happily signs corporate partnerships with the cereal industry agreeing to use their members to 'influence, protect and actively defend' not only cereals and grains, but sugars messaging, too? #cereal4brekkie

* Sanitarium is involved in medical education promoting a 'Plant-based' Biblical, Garden of Eden diet - of fruit, nuts and seeds as the God Appointed diet for man?

As most of you will know, my brave husband - Dr Gary Fettke - became a vocal advocate of preventative health, raising the same issues about sugar and refined/processed carbohydrates back in 2013 after improving his own health and then seeing the benefits for his patients and the wider community.

Like Dr Muecke, Gary was seeing people with end-stage diabetes. He was debriding and amputating bits of feet, and even lower legs, every single week in the Northern Tasmanian public health system. A system that still does not have a junk food policy in place and includes 3 desserts per day as their 'diabetic menu'!

"Blindness is just one of many complications of diabetes and, as an eye surgeon, I see the end stages of the disease," Dr Muecke said.

Type 2 Diabetes is not a chronic progressive disease despite what Diabetes Australia promotes...

I sincerely hope the Tasmanian AHPRA medical board is regretting their 2 1/2 year star chamber investigation of Gary for being a passionate advocate of preventative health. I hope they regret asking only ONE question of Gary face to face: "Dr Fettke, do you consider advising patients to reduce sugar is specific dietary advice." Gary refused to lie and said "Yes." He was subsequently threatened with deregistration if he continued to talk about nutrition (including reducing sugar) with his patients. A determination that took a further 2 years to revoke!

I sincerely hope the Dietitians Association of Australia stop protecting industry and targeting Low Carb advocates, calling LCHF/Keto a FAD diet. It's truly getting beyond embarrassing...