Lifestyle Medicine and EAT-Lancet... the same, but different?

When I listened to Dr Georgia Ede's presentation from June 2019 on the EAT-Lancet Report I couldn't help but be drawn to the similarities between the concepts she was describing and the issues I have found with 'Lifestyle Medicine'.

In January she wrote; "The EAT-Lancet report has the feel of a royal decree, operating under the guise of good intentions, seeking to impose its benevolent will on all subjects of planet Earth.

"Capitalizing on our current public health and environmental crises, the EAT-Lancet Commission pronounces itself as the authority on the science of nutrition, exploits our worst fears, and seeks to dictate our food choices in accordance with its members' personal, professional and possible commercial interests".

I have been questioning the evolution of the 'plant-based' dietary guidelines since 2014 and have to admit, even I was surprised to find Religious Ideology with an anti-meat agenda has been instrumental in shaping our dietary and health guidelines for 150 years.

I can't stay silent, but I try to be respectful.

If you are interested in the history please join me in a deep dive here.

I am not anti-religion nor am I anti-vegan, I am pro-choice, especially when it comes to health.

My concern is... 'choice' is being taken away from you and I by those creating, and protecting, the 'plant-based' dietary and health Rule-Books.

Taken away from people who choose to follow Low Carbohydrate Healthy Fat (LCHF) principles and include animal proteins and fats in their diet for their own health.

EAT-Lancet and Lifestyle Medicine - the same, but different?

Georgia responded to the EAT-Lancet Report in June stating; "An important new study about global nutrition has been published that deserves everyone’s full attention: Food in the Anthropocene: the EAT-Lancet Commission on healthy diets from sustainable food systems. [Don’t let the title intimidate you: You need to know what’s inside.] This paper was commissioned and published by The Lancet - one of the world’s oldest and most respected medical journals - and penned by an international group of 37 scientists led by Dr. Walter Willett of Harvard University.

"The 47-page document envisions a “Great Food Transformation” which seeks to achieve an environmentally sustainable and optimally healthy diet for the world’s people by 2050. Its core recommendation is to minimize consumption of animal foods as much as possible, and replace them with whole grains, legumes, and nuts..."

I highly recommend reading, or listening, to Georgia's brilliant observations on the EAT-Lancet's Plant-Based Planet: 10 Things You Need to Know. 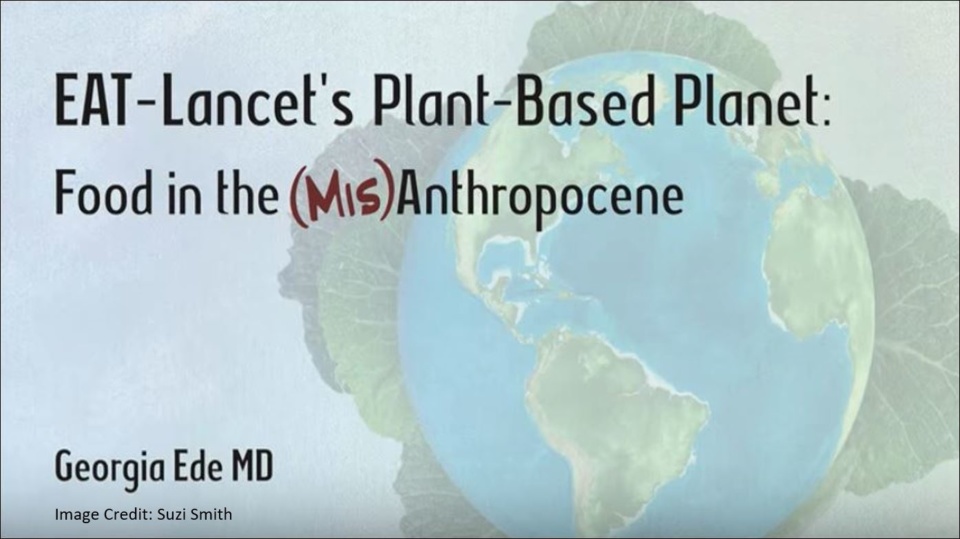 As Georgia explains, EAT-Lancet has:

*Powerful institutions and corporations behind it

*A seemingly endless benevolent agenda which wards off criticism

(... and so does the Lifestyle Medicine Global Alliance. Both groups even share a principal nutritionist.)

*The concern is; vegan diets require careful planning and make people dependent on 'experts', supplements and fortified foods, which by their very nature must be processed.

How does the EAT-Lancet messaging align with 'Lifestyle Medicine'?

The Lifestyle Medicine Global Alliance (LMGA) is a well orchestrated rallying cry when you consider the 'sister organisations' that now represent Lifestyle Medicine globally, conducting exams around the world encouraging health professionals, and allied health practitioners, to promote the Health Reform principals of the Seventh-day Adventist Church including their 'Plant-based' vegan Garden of Eden diet. 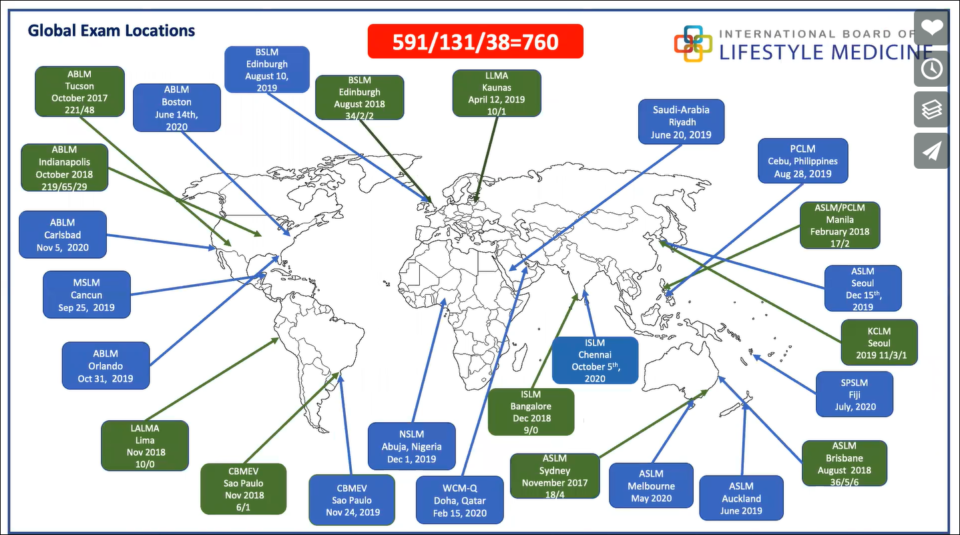 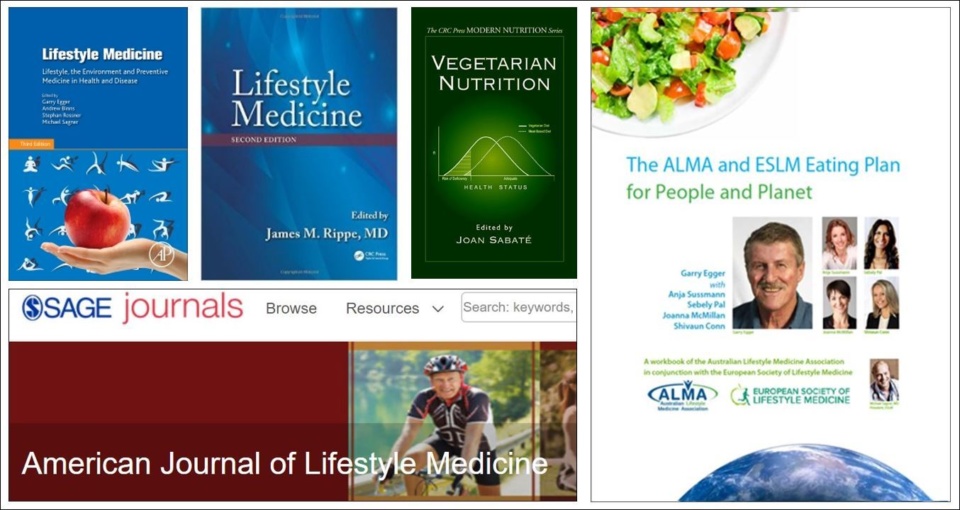 "Powerful institutions and corporations behind it." 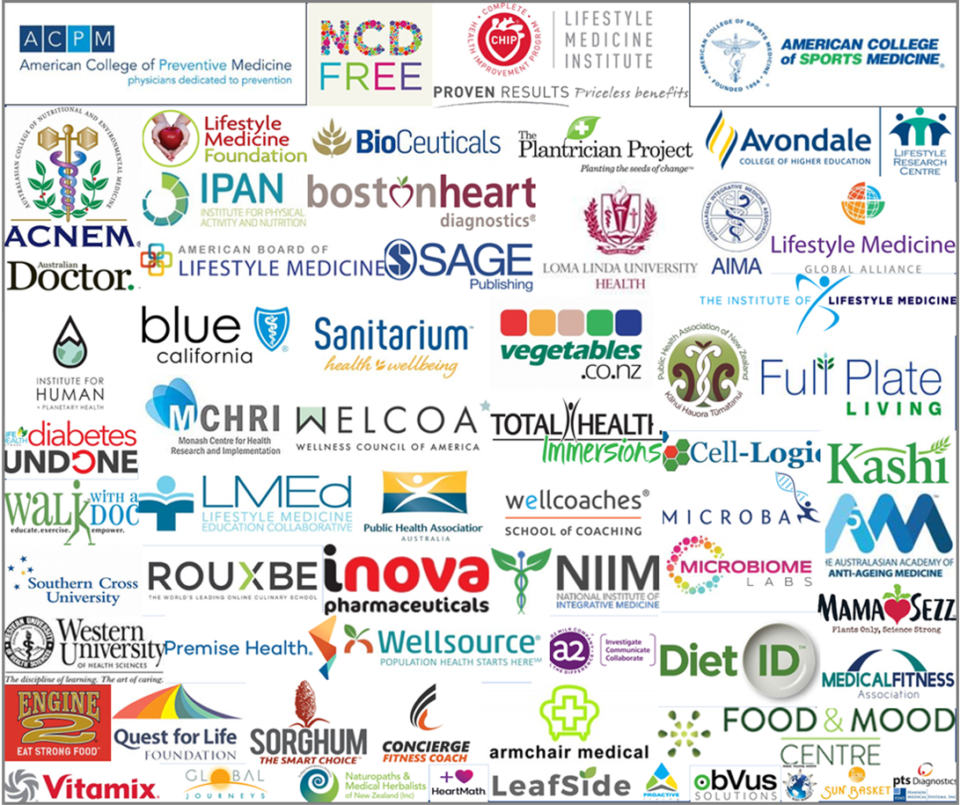 But, what is really interesting is the novel partnerships I have uncovered between Coca-Cola and Lifestyle Medicine since Exercise is Medicine’s Steven Blair and Edward Phillips became Advisory Board members of the American College of Lifestyle Medicine (ACLM) in 2010.

Coca-Cola’s entire family of brands is acknowledged as a platinum sponsor for the Lifestyle Medicine 2012 ‘Treating the Cause’ Clinical Conference, with the Adventist CHIP program appearing on the sponsor page, too.

*Incredibly, within weeks of the GEBN folding the ESLM completely wiped their website of all content. I discuss this in more detail here.

The recent collaboration between 'Lifestyle Medicine', founded by members of the Seventh-day Adventist Church, and Coca-Cola's Exercise is Medicine, sitting under the umbrella of the LMEd Collaborative, perpetuate not only the demonisation of saturated animal fats, but are intent on demonising animal proteins too, explained in more detail here. 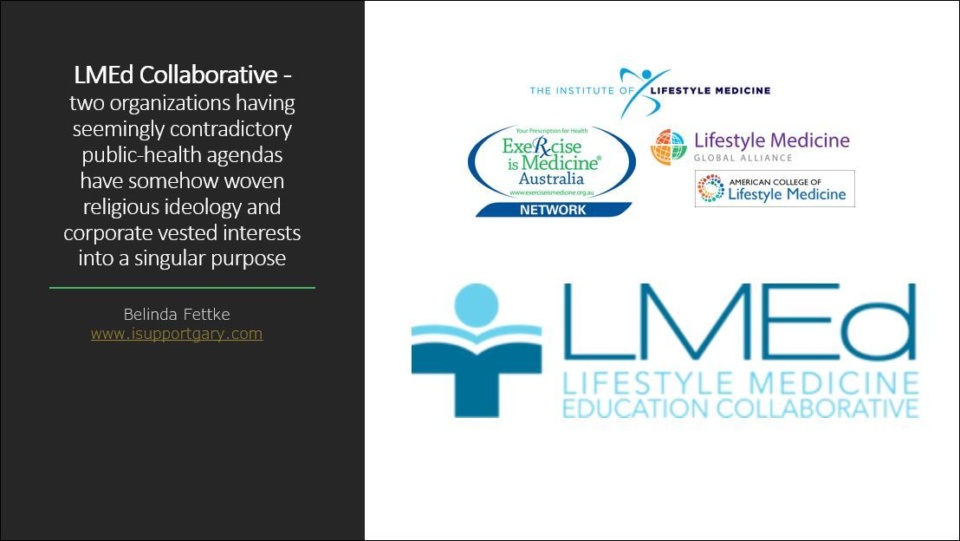 Walter Willett is the principal nutritionist on the EAT-Lancet Report and has been an Advisory Board member of the American College of Lifestyle Medicine (ACLM) since its founding in 2004.

Walter Willett acknowledges the history and close ties between Loma Linda and Harvard going all the way back to 1954 when Adventist Mervyn Hardinge published the findings of his Doctoral Dissertation under the supervision of Frederick Stare.

The concern is... "vegan diets require careful planning and make people dependent on 'experts', supplements and fortified foods, which by their very nature must be processed." Georgia Ede MD

The Adventist Health Ministries provide a number of publicly available fact sheets on health and nutrition, including one on Vitamin B12.

They acknowledge “Vitamin B12 is of special interest to vegetarians, particularly total vegetarians (they don't like to use the word vegan), since it is found only in animal-based products including red meat, poultry, seafood, dairy products and eggs."

The question they ask themselves...

Why is Vitamin B12 fortification of a plant diet necessary today, if the Original diet (in the Garden of Eden) was ideal and ensured optimal health?

Their answer suggests that Vitamin B12 was in the fruit of the Tree of Life which was taken away from Adam and Eve after she disobeyed God and took fruit from the Tree of Knowledge. 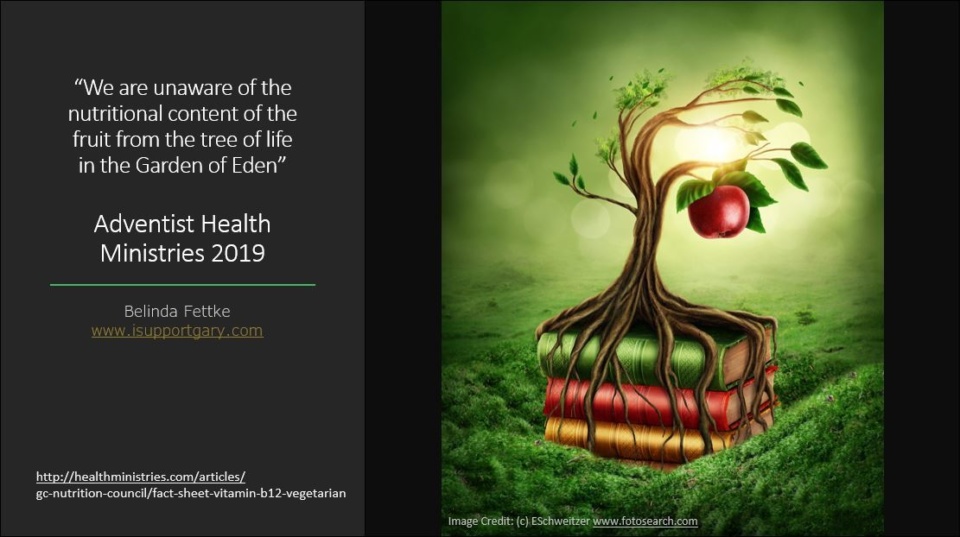 After the Fall disease and death entered the world...

"Again and again I have been shown that God is trying to lead us back, step by step, to His original design... Among those who are waiting for the coming of the Lord, meat-eating will eventually be done away; flesh will cease to form a part of their diet... All who are connected with our health institutions especially should be educating themselves to subsist on fruits, grains and vegetables. If we move from principle in these things, if we as Christian reformers educate our own taste, and bring our diet to God's plan, then we may exert an influence upon others in this matter, which will be pleasing to God." Adventist Church founder Ellen G White, self proclaimed Lord's Messenger.

Georgia continues; "The vast majority of human nutrition research - including the lion share of the research cited in the EAT-Lancet report - is conducted using the tragically flawed methodology of nutrition epidemiology. Nutrition epidemiology studies are not scientific experiments; they are wildly inaccurate, questionnaire-based guesses (hypotheses) about the possible connections between foods and diseases. This approach has been widely criticized as scientifically invalid [see here and here], yet continues to be used by influential researchers at prestigious institutions, most notably Dr. Walter Willett."

As you may be aware, the Adventist Health Studies have generated over 1,200 papers, referred to over and over again, and they are all epidemiological studies. Incredibly, researchers note several limitations;

*Participants only reported their diet at the beginning of the study, and their eating patterns might have changed over time

*In addition, they were only followed for an average of 6 years; it may take longer for dietary patterns to influence mortality

*To qualify as 'vegan' in the Adventist Health Study independent reviewers at Palm Beach Research Centre claim that people ate eggs, dairy products, fish, and meat less than once a month, which appears to be contrary to the graphic portrayed below as dietary patterns adapted from Gary Fraser as the Principle investigator of the AHS. Less than once a month is not

*The 2018 General Conference survey noted that only 5% of Seventh-day Adventists actually identify as Vegan... 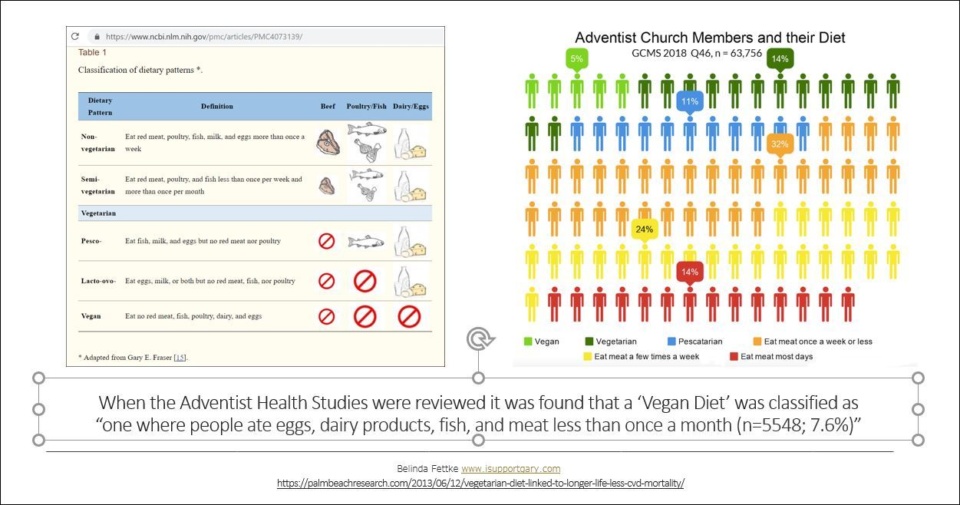 Dr Robert B Baron (University of California, San Francisco) points out since it was an observational study, cause-and-effect conclusions cannot be drawn from the studies, based on a one-time questionnaire.

A reasonable question to ask then; 'are participants entering into the AHS keen to prove that a 'vegetarian' diet and their Adventist lifestyle increases longevity'?

In 1863 Seventh-day Adventist Church founder Ellen G White taught that adherence to the Garden of Eden lifestyle would eventuate in humankind's reclamation of the potential for super longevity, such as that attributed to Adam (930 years) or Methuselah (969 years)...

*The perennial assumption among vegetarians is that vegetarianism increases longevity. I discussed this matter 25 years ago with an Seventh-day Adventist physician who was Dean of the Loma Linda University (LLU) School of Public Health. Although he (the Dean) admitted that lifelong SDA vegetarians had not exhibited spectacular longevity, he professed that longevity of the antediluvian sort might become possible over several generations of vegetarianism.

*SDA periodicals publicize centenarians and often attribute their longevity to the SDA lifestyle. However, of 1200 people who reached the century mark between 1932 and 1952, only four were vegetarians.

*I continue to ask: Where on Earth is there an exceptionally longevous population of vegetarians? Hindus have practiced vegetarianism for many generations but have not set longevity records. At best, the whole of scientific data from nutrition-related research supports vegetarianism only tentatively.

*The incidence of colorectal cancer among non-vegetarian Mormons is lower than that of SDAs.

*A review of populations at low risk for cancer showed that World War I veterans who never smoked had the lowest risk of all.

*As data accumulate, optimism that a low fat, high fibre diet is a significant factor in cancer appears to be diminishing. An analysis of 13 case-control studies of colorectal cancer and dietary fiber showed that, for the studies with the best research methods, risk estimates for dietary fiber and colorectal cancer were closer to zero.

*A pooled analysis of studies of fat intake and the risk of breast cancer that included SDA data showed no association.

Which brings to question; "does research into vegetarianism by vegetarians involve at least some degree of unconscious bias?" Gary discusses more here.

We might expect conflict of interest concerns to be raised, for example, about Seventh Day Adventists who are studying the health effects of the comparatively abstemious lifestyle of their fellow Adventists. Whereas policies at The Journal of the American Medical Association and The New England Journal of Medicine emphasize financial conflicts, Science asks authors to divulge "any relationships that they believe could be construed as causing a conflict of interest, whether or not the individual believes that is actually so." In other words, to comply with disclosure policies at Science, authors might need to disclose to editors their religion and sexual orientation along with their financial portfolio.

In summary, Lifestyle Medicine is very much like the EAT-Lancet Report in that it has a well orchestrated rallying cry to adopt a dangerously deficient diet, a unified message with vast resources, powerful institutions and corporations behind it, and a seemingly endless benevolent agenda which wards off criticism.

Most concerning of all is the novel partnership Lifestyle Medicine has developed with Coca-Cola's Exercise is Medicine (EIM) and previously with the now defunct Global Energy Balance Network (GEBN) - something they appear to have tried hard to cover up!

Ellen G White was anti-caffeine and discouraged the use of added sugar. I am not sure how she would feel about Lifestyle Medicine promoting the Adventist Health Reform message 'with a side of Coke'...

Nutrition Science... How did we get here? Belinda Fettke LCDU 2019