Briefly, I will discuss the story leading up to Professor Tim Noakes's trial and the outcomes, with links to articles about him being reported, the investigation, the trial and his ruling, but first I would like to share the latest petition to the HPCSA;- challenging their appeal of Prof Tim Noakes's April 2017 acquittal. Of the various charges alleged against him at the time, his “unconventional advice” via a tweet to a breastfeeding mother was considered to be “not evidence-based.”

Please join me in signing the petition to the Health Professions Council of South Africa (HPCSA) organised by Dr Sarah Hallberg Virta Health. This effort is supported by The Nutrition Coalition, a non-profit group that aims to ensure that nutrition policy is evidence-based. www.nutritioncoalition.us. 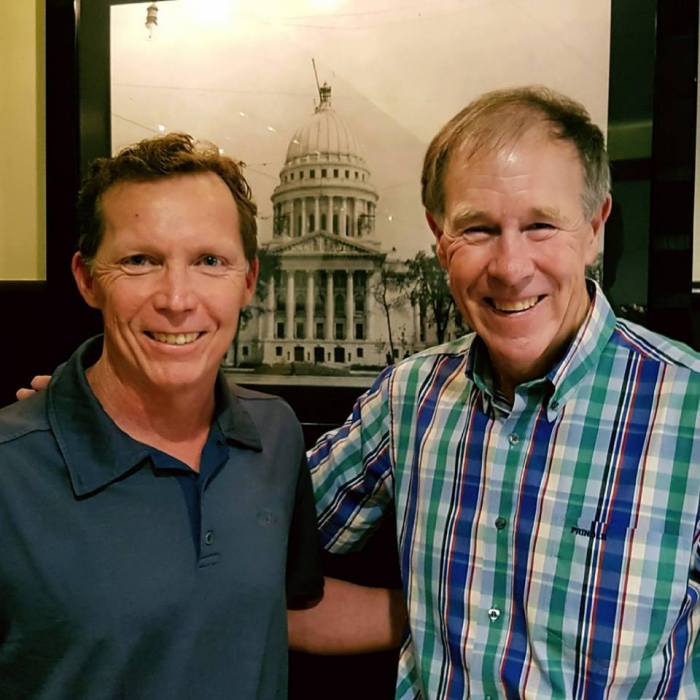 Why are the HPCSA putting Low Carb Healthy Fats on trial, again?

Promoting Low Carbohydrate Healthy Fat principles, instead of the current 'Wholegrain Plant-based' processed cereal/grain and soy/legume doctrine (that also happens to be 'anti' animal protein and saturated fats) has meant that Tim Noakes has found himself in a turf war with the South African Dietitians Association just like Gary Fettke has in Australia.

Interestingly, over the last few years we have come to realise that 'nutrition science' has been shaped by Vested Interests and ideology. The guidelines produced from this accepted paradigm of 'nutrition science' have become strict Rule-Books; fiercely protected by Associations that partner with food and pharmaceutical industries; and Regulatory Bodies that keep health professionals from stepping out of line.

I want to take this opportunity to acknowledge and thank our dear friend Marika Sboros for her tireless work covering Tim Noakes's reporting, his subsequent investigation and the lengthy trial that followed, to which I will share links below.

In her most recent post dated 19th February 2018, Marika writes "The Health Professions Council of South Africa (HPCSA) is back on the warpath against Prof Tim Noakes. It is appealing its own committee’s comprehensive not guilty verdict for Noakes in April 2017 on a charge of unprofessional conduct.

"The HPCSA claims that its Professional Conduct Committee “erred and misdirected themselves on the law and facts”.

"It has objected to a request by Noakes’s lawyers to introduce incriminating new evidence. The evidence supports extensive evidence already on record suggesting that dietitians from the Association for Dietetics in SA (ADSA) really did set him up.

"The new evidence shows up in a PAIA (Protection of Access to Information Act) request. Instructing attorney, Adam Pike, of Pike Law, made the request to ADSA in June 2017.

"Noakes’s legal team has filed a cross-appeal going for costs. They say that the HPCSA went after Noakes illegally. It had no sustainable case from the outset."

For the full series of Tim's reporting, investigation and trial please click here. 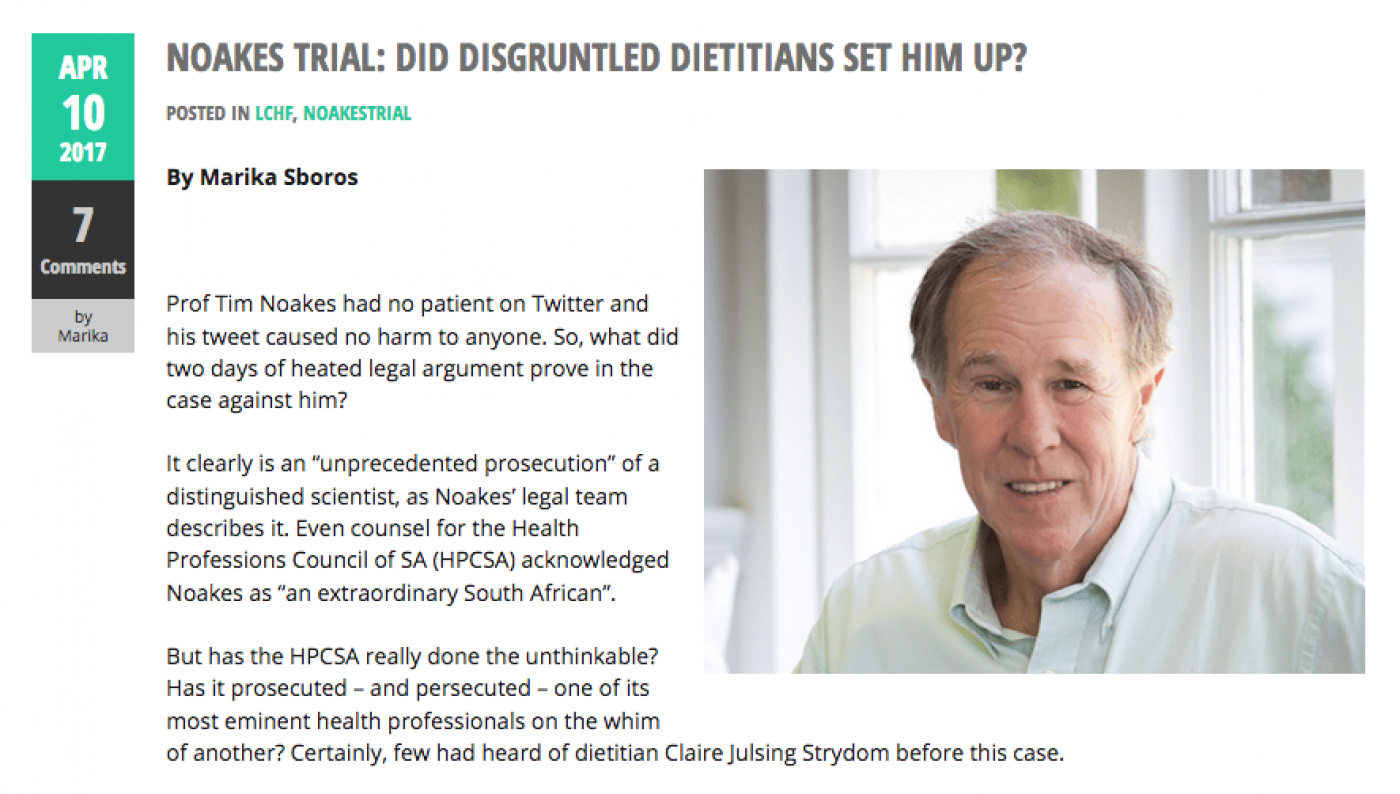 NOAKES TRIAL: DID DISGRUNTLED DIETITIANS SET HIM UP?

"Prof Tim Noakes had no patient on Twitter and his tweet caused no harm to anyone. So, what did two days of heated legal argument prove in the case against him?

"It clearly is an “unprecedented prosecution” of a distinguished scientist, as Noakes’ legal team describes it. Even counsel for the Health Professions Council of SA (HPCSA) acknowledged Noakes as “an extraordinary South African”.

"But has the HPCSA really done the unthinkable? Has it prosecuted – and persecuted – one of its most eminent health professionals on the whim of another? Certainly, few had heard of dietitian Claire Julsing Strydom before this case.

"But is Strydom a malcontent, a disgruntled dietitian who went after Noakes because he disagreed with her? If not, why did the HPCSA take up her complaint that many consider frivolous? And why did it argue forcefully not just in Strydom’s corner but for all dietitians?

"Why does the HPCSA believe that Noakes is wrong and Strydom is right? And that she has the right to freedom of expression but he does not?

"Just as importantly, why has the HPCSA made a simple hearing over a single tweet into a full-blown trial? After all, its hearings are not supposed to be adversarial. Here’s Part 1 of a review of the case so far and what to expect next. In Part 2, we look at the verdict on who really dishes up dangerous advice.

The inability of current recommendations to control the epidemic of diabetes, the specific failure of the prevailing low-fat diets to improve obesity, cardiovascular risk, or general health and the persistent reports of some serious side effects of commonly prescribed diabetic medications, in combination with the continued success of low-carbohydrate diets in the treatment of diabetes and metabolic syndrome without significant side effects, point to the need for a reappraisal of dietary guidelines. The benefits of carbohydrate restriction in diabetes are immediate and well documented. Concerns about the efficacy and safety are long term and conjectural rather than data driven. Dietary carbohydrate restriction reliably reduces high blood glucose, does not require weight loss (although is still best for weight loss), and leads to the reduction or elimination of medication. It has never shown side effects comparable with those seen in many drugs. Here we present 12 points of evidence supporting the use of low-carbohydrate diets as the first approach to treating type 2 diabetes and as the most effective adjunct to pharmacology in type 1. They represent the best-documented, least controversial results. The insistence on long-term randomized controlled trials as the only kind of data that will be accepted is without precedent in science. The seriousness of diabetes requires that we evaluate all of the evidence that is available. The 12 points are sufficiently compelling that we feel that the burden of proof rests with those who are opposed. 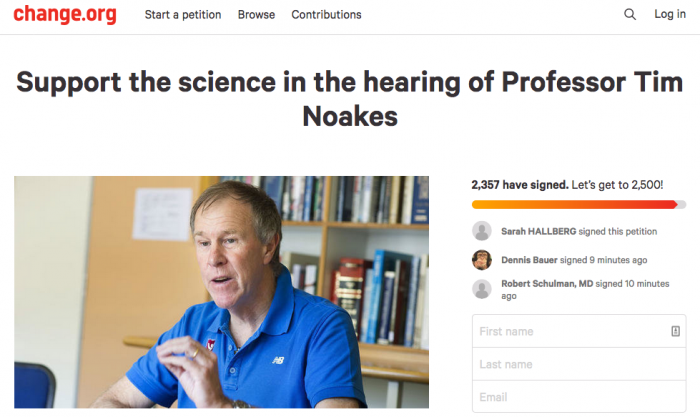 To the Health Professions Council of South Africa:

We understand that you are appealing the April 2017 acquittal of Professor Tim Noakes. Of the various charges alleged against him was that his “unconventional advice” via a tweet to a breastfeeding mother was “not evidence-based.” [1] The judgement on this point by the HPCSA was that Professor Noakes’ tweet was “not not evidence-based,” [2] or, in other words, that it was evidence-based.

We, the undersigned, set forth in this letter a large body of scientific evidence to demonstrate that the kind of diet favored by Professor Noakes—that is, one lower in carbohydrates and higher in fat than the traditional “low-fat” diet--is, indeed, evidence-based.

Low-carbohydrate diets have now been tested in more than 70 clinical trials [3] on nearly 7,000 people, including a wide variety of sick and well populations. Thirty-two of these studies have lasted at least six months and six trials went on for two years, enough time to demonstrate the lack of any negative side effects. In virtually every case, the lower-carb, higher-fat diets did as well or better than competing diets. [4]  The cumulative evidence shows that low-carb diets are safe and effective for combating obesity, [5] highly promising for the treatment of Type 2 diabetes,[6] and improve most cardiovascular risk factors. [7]

Moreover, the best-available data from the U.S. government shows that in 1965, Americans ate 39% of calories as carbohydrates and 41% as fat. [8]  These percentages are what nutrition researchers now consider to be within the realm of a “low-carbohydrate, high-fat” diet. Thus, all Americans, including infants (the population addressed by Professor Noakes’ tweet) were formerly on the sort of diet that he favors. (This was, of course, before the epidemics of obesity and diabetes from which so many nations suffer today.)

Part of the claim against Professor Noakes was that his tweet responded to a question about weaning an infant child. We understand that the South African pediatric guidelines (2013) advise "From 6 months of age give your baby meat, chicken, fish, or egg every day as often as possible. Give your baby dark green leafy vegetables and orange coloured vegetables and fruit every day.” [9] This advice is entirely consistent with a low-carbohydrate, higher fat diet.

Finally, recent results, published in The Lancet, from the largest-ever and only truly global epidemiological study, called PURE, find that populations with the highest-fat and lowest carbohydrate consumption had the lowest rates of total mortality. [10]

Taken together, these findings firmly support the advice given by Professor Noakes. Further, virtually no rigorous clinical trial data exist to contradict this body of evidence.

Thus, from a scientific perspective, the evidence overwhelmingly supports the idea that a diet low in carbohydrates and high in fat is “evidence based.”