AHPRA implementing some of the recommended changes after Senate inquiry

"The nation’s medical watchdog is implementing some of the changes recommended by a Senate committee, after an inquiry into alleged bullying found “radical change” was needed.

Launceston orthopedic surgeon Dr Gary Fettke, who has been a long-time advocate of a low carbohydrate diet, was used as a case study during the inquiry.

“It is not sufficient that AHPRA is confident that its processes are robust,” the Senate report said.

“Everyone who uses the complaints process must be able to have confidence that the system is fair, rigorous, transparent and timely.” 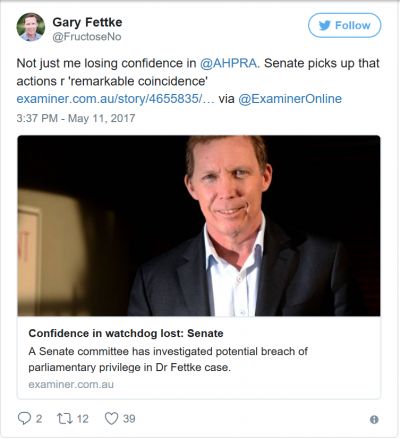 An AHPRA spokeswoman said the agency was still considering the recommendations.

"Several of the recommendations made by the Senate committee relate to areas where AHPRA has already made significant improvement,” she said.

“This includes the committee’s first recommendation, which is about how anyone who makes a complaint or raises a concern is kept informed during the complaints process.”

She said the report recommended AHPRA and National Boards ensured the complaints process was fair and timely.

“AHPRA has taken action to address concerns related to vexatious complaints, such as commissioning research and reviewing the Medical Board of Australia’s code of conduct to make the board’s expectations explicitly clear.

"Work to improve the timeliness of the complaints process is also underway, including work to ensure the right external professional and clinical advice is provided at the right time when a complaint is made.

Less than an hour after Dr Fettke gave evidence during the inquiry on November 1 last year about his experience being investigated by the agency, the Tasmanian Board of the Medical Board of Australia cautioned him.

On November 16, AHPRA issued a media release about his case.

However, AHPRA advised the committee there was no relationship between the timing of the notification, and said the media release was issued to combat a “level of misinformation” in the media about the case.