Shockingly, on June 20th 2018, it was announced via Doctor Portal that the Australian Health Practitioner Regulation Agency (AHPRA) has begun to publicly link disciplinary and court decisions to the registration details of doctors, regardless of whether the doctor has been found guilty of anything, which is seriously concerning...

A finding made many years before, that has no relation to the doctor’s current practice or conditions, will remain linked to the AHPRA register in perpetuity.

The ability to slur a health professional's name, deeply disrupting lives for years and potentially ruining careers, occurs when AHPRA refuses to acknowledge that vexatious complaints can be used to instigate an investigation. Not only that, but their investigation process can be used as a vehicle to punish doctors with no case of patient harm nor patient complaint, as happened to Gary in May 2014.

Doctors who provide holistic healthcare, are innovative, deprescribe, and challenge the health benefits of dietary and health guidelines often become the target of vexatious complaints. Once reported, Health Care Professionals find the AHPRA process intimidating, caught up in a 'star-chamber' investigation where the goal posts shift regularly.

There is no transparency, no accountability, no advocacy, nor any representation allowed during an investigation by the AHPRA State Medical Boards. It is almost impossible to access any of the documentation supplied to the investigator for the board's review, either. Freedom of Information is denied over and over again, and if any documents are supplied, they are redacted to the point that you can barely make head or tail of them, from our experience.

There is no appealability until judgement has been handed down by the AHPRA Board who become not only the Judge, but the Jury AND the Executioner!

Some of the comments on social media include;

"A total violation of fundamental rights and human decency. And more alarmingly, the entire profession isn't up in arms!"

"That is not transparency of a physician, or of medical field members... It is an ugly display of the cheap morality of unleashed slander rights exercised by self important people, totally driven by bruised egos, and general turf protection."

"I'd like a register of all complaints about politicians and board members of agencies but unfortunately, they are protected."

Is bullying part of the AHPRA culture? 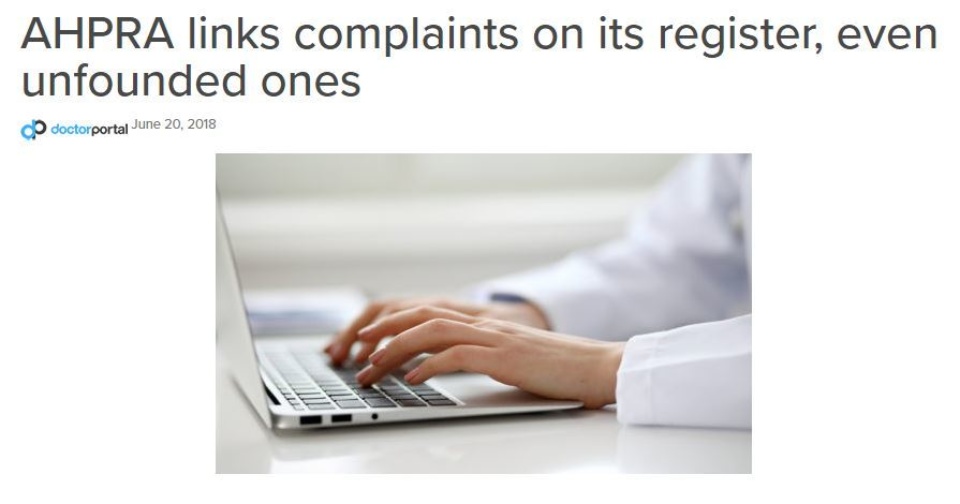 The impact of AHPRA on a life

One of the biggest issues is that the current system refuses to acknowledge that to err is human. How many actions of health care professionals, reported to AHPRA, are truly of a CRIMINAL NATURE?

An Author, a Poet, an Innovator, and a Surgeon who has suffered like so many others, under the AHPRA process. 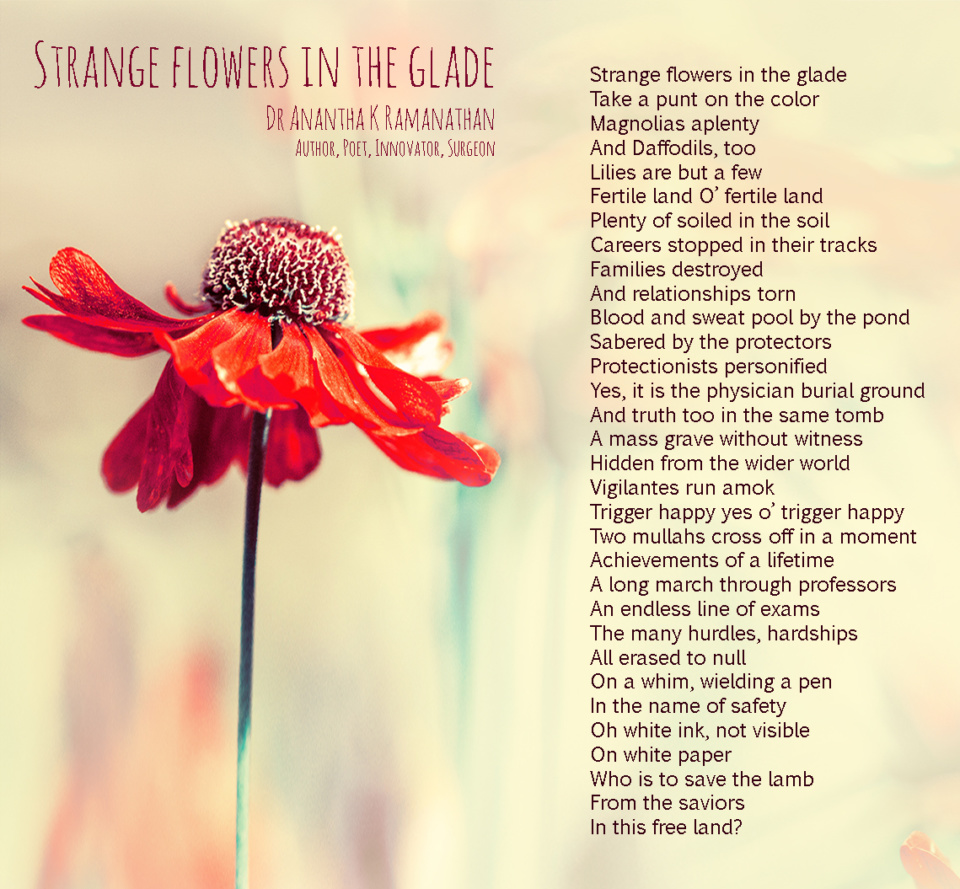 Anantha's words "All erased to null on a whim, wielding a pen in the name of safety" are devastating. #itisntfair

Unlike the Common Law of Australia, AHPRA's operations which came into effect on 1 July 2010 are governed by the 'National Law' they made up a mere 8 years ago. 16 health professions are now regulated under the National Registration and Accreditation Scheme.

16 professions, but not dietetics!

Why is dietetics not under the AHPRA umbrella?​

The Senate Inquiry into Medical Complaints Process in Australia 2016/17 was told the reasoning behind the decision not to include the Dietitians Association of Australia under the AHPRA umbrella was that the profession of dietetics was deemed to low a risk to public safety.

Dietetics was not included under the AHPRA umbrella because the profession was deemed too low a risk to public safety to justify the costs of setting up regulation under the framework of AHPRA.

So, dietetics was considered too low a risk to justify the costs of setting up regulation under the framework of AHPRA, yet Gary gets investigated by AHPRA for 2 ½ years for recommending patients reduce sugar and processed carbohydrates and eat real food?

It certainly seems like AHPRA was being used as a vehicle to 'silence' Gary by the Dietitians Association of Australia and save the Tasmanian Health Service from having to get involved!

The AHPRA National Law is 'juvenile' compared to the Common Law of Australia which has been evolving for hundred's of years.

The AHPRA National Law is an inquisitorial system where health professionals are 'guilty' and have to try to prove their innocence, which is almost impossible when the investigations are carried out behind closed doors with the goal posts shifting regularly.

There is no transparency, no accountability, no advocacy nor representation and it is almost impossible to access any of the documentation supplied to the investigator for the board's review. Freedom of Information is denied over and over again, or the documents supplied are redacted to the point that you can barely make head or tail of them.

There is no appealability until judgement has been handed down by the AHPRA Board who become not only the Judge, but the Jury AND the Executioner, too!

There is NO oversight of the process.

Gary says AHPRA are a body without boundaries. Challenge them and it is a house of smoke and mirrors.

What does a Criminal Record mean?

According to Australian Common Law a criminal record is the formal record of offences that have been convicted from either pleading guilty or having been found guilty.

If someone has been found not guilty, the conviction will not show up in any record. (How can the AHPRA National Law not follow suit??) In fact, even if someone is found guilty or pleads guilty to an offence, the magistrate may decide not to record a conviction.

Common Law criminal records don’t necessarily last forever, either. Someone can say they have no convictions if they meet all the following criteria:

*If more than 10 years has passed

*Not broken the law since the conviction

The Health Practitioners Australia Reform Association (HPARA) is the only organisation that recognises the serious problems in the regulation of health professionals. The 2016 and 2017 Senate Inquiries identified many of the issues, but the political system has failed to act and rectify them.

In 2017, Gary was invited to speak at their annual conference. His talk is AHPRA throwing rocks inside their own glass house discusses the role, and importance, of respect in health regulation.

Dr Maxine Szramka spoke about 'CARE - the foundation of health care regulation.' AHPRA appears to have forgotten that their purpose 'to Protect the Public’ includes healthcare professionals, too.

Dr Jane Tolman, another Tasmanian innovator with a passion for preventative health, shared her AHPRA notification experience at the meeting, too.

The strong take-away message from the day was the need for a fair and transparent process. There is a need to provide ‘care’ for healthcare professionals under investigation with mediation in a constructive and supportive environment.

The Senate committee found 'systematic issues' with medical watchdog after a Senate inquiry investigated allegations of bullying and harassment by the Australian Health Practitioner Regulation Agency and the Medical Board of Australia.

The committee found practitioners and victims had lost confidence in the Australian Health Practitioner Regulation Agency’s administered process. You can read the Hansard here. 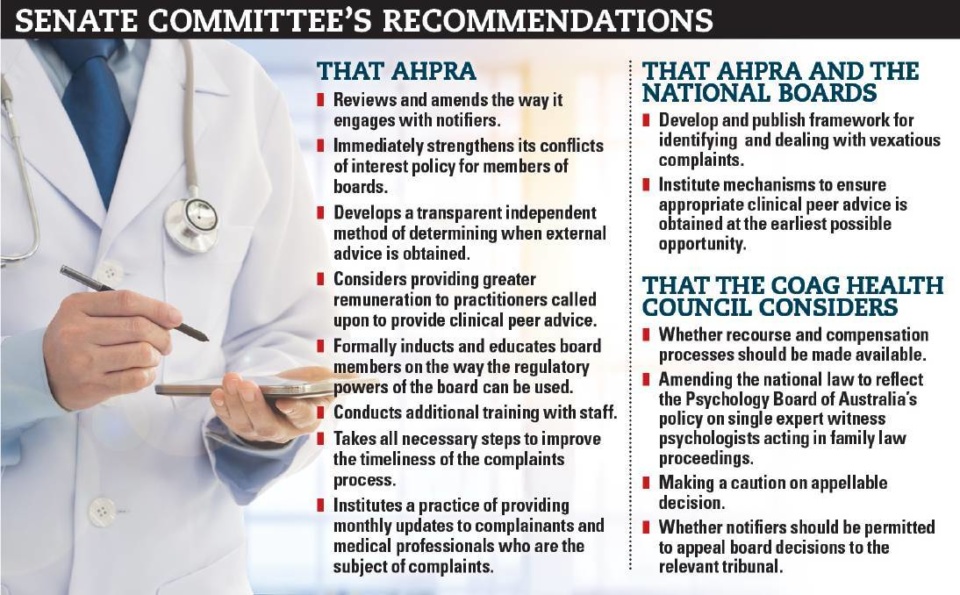 The Senate committee released 14 recommendations following the inquiry. An AHPRA spokeswoman said the agency was still considering the recommendations...

“It is not sufficient that AHPRA is confident that its processes are robust,” the Senate report said.

“Everyone who uses the complaints process must be able to have confidence that the system is fair, rigorous, transparent and timely.”

Nearly 18 months later and nothing much has changed ... instead, the system seems to be closing in and intensifying. #itisntfair