I am proud to have been involved in the successful hashtag #yes2meat on social media platforms, especially Twitter, when Low Carb advocates, nutrition scientists, and even the Italian representative to International Organisations, rallied together to challenge the EAT-Lancet's $3 million dollar PR campaign determined to implement a global, nutrient deficient, one-size-fits-all "Planetary Health diet" 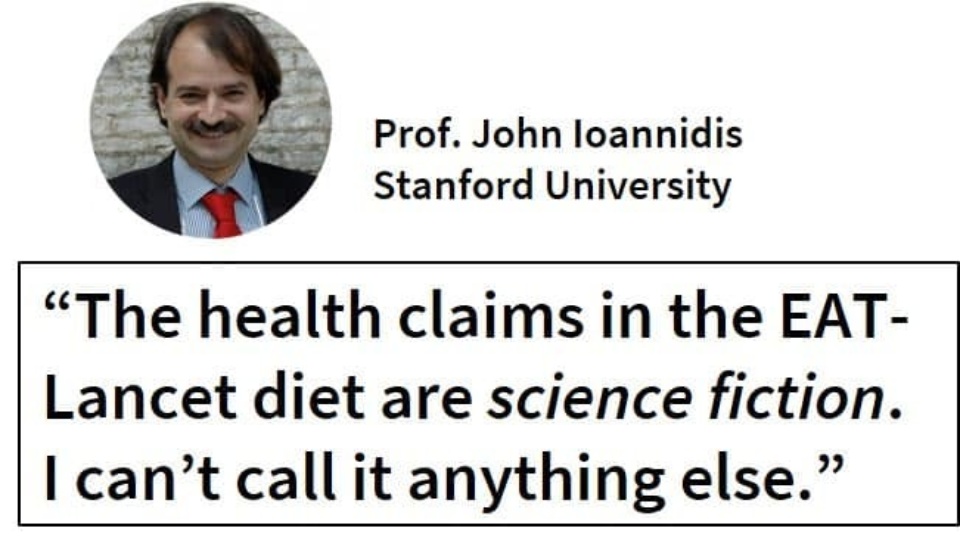 I consider being listed closely behind Georgia Ede MD, Diana Rodgers RD, and Nina Teicholz, as among the top negative "misinformation" threats, a badge of honour with my summary article:- Is the EAT-Lancet (Vegan) Rule-Book Hijacking Our Health? 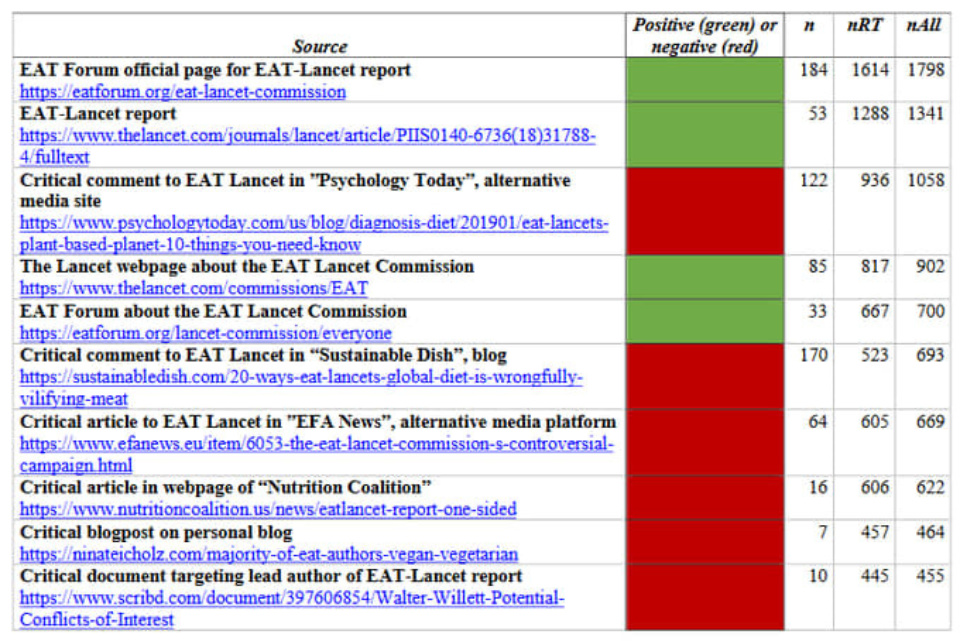 The paper acknowledging our success, published November 25, 2019 is titled: EATLancet vs yes2meat: the digital backlash to the planetary health diet, available here.

"Never doubt that a small group of thoughtful, committed citizens can change the world; indeed, it's the only thing that ever has."

But it wasn't only a small group of concerned citizens that took to social media to voice their concerns. Italy UN Geneva spoke out strongly against EAT-Lancet on Twitter, suggesting the World Health Organisation should avoid being involved with it. 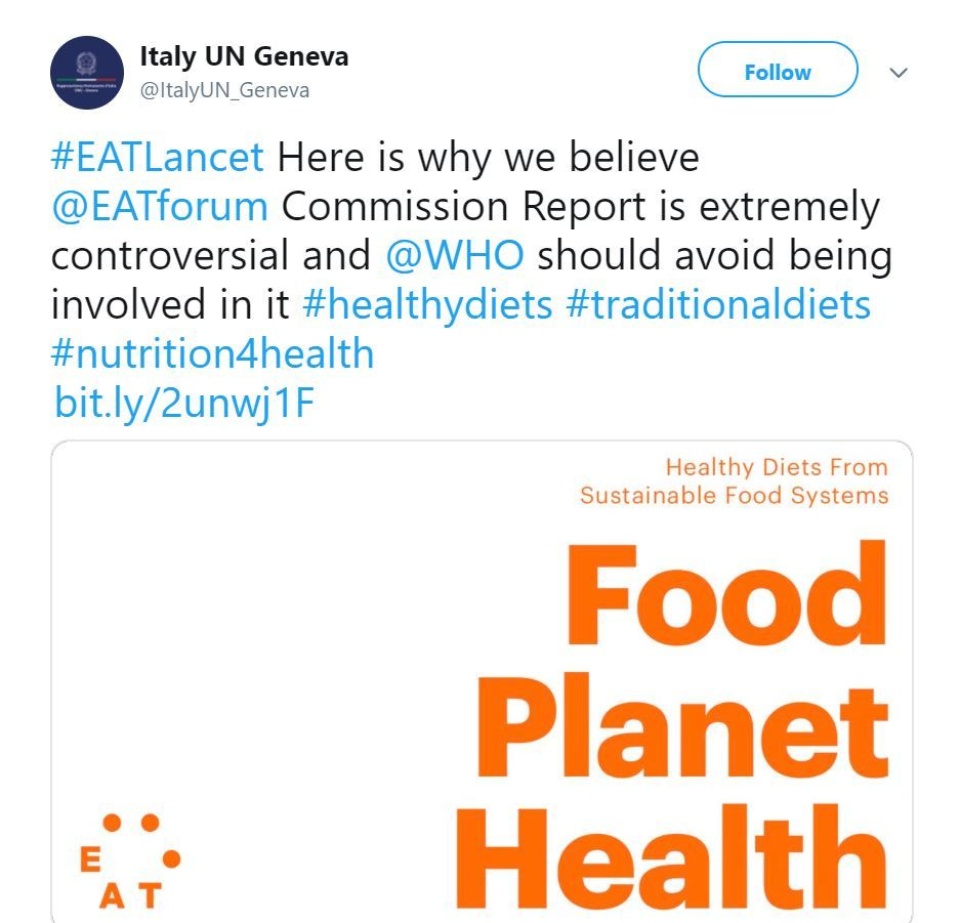 They followed up their concerns with a press release stating: "Next March 28th, a presentation of the EAT-Lancet Commission Report on “Healthy Diets from Sustainable Food Systems” will take place at the Palais des Nations in Geneva, sponsored by the World Health Organization. 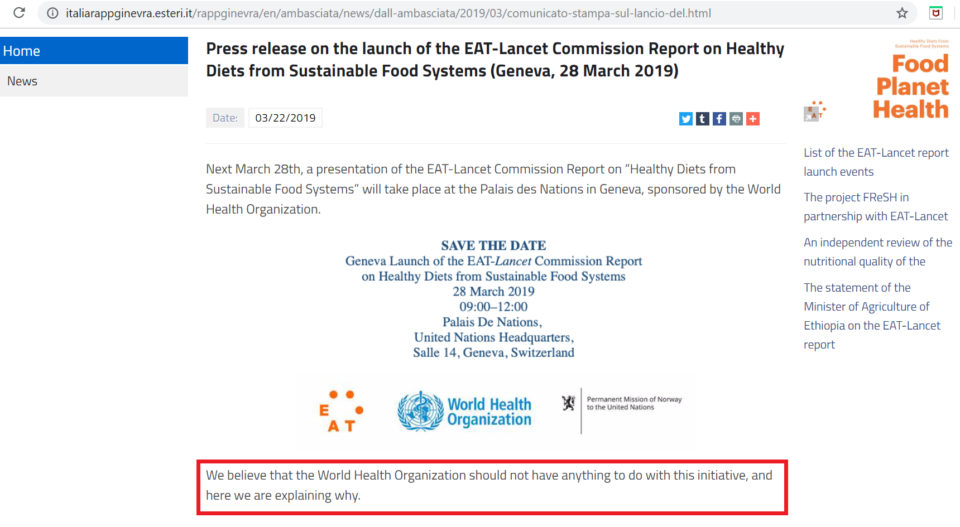 We believe that the World Health Organization should not have anything to do with this initiative.

The Permanent Representative of Italy to the International Organizations in Geneva​

The Press Release went on to discuss (in summary)

*What is the EAT-Lancet Report?

EAT describes itself as “a global, non-profit startup dedicated to transforming our global food system through sound science, impatient disruption and novel partnerships”.

The prescription looks very close to a vegetarian/vegan diet.

*Who produced the Report?

The EAT-Lancet Report has been produced by a Commission of 37 members, who participate as independent experts.

*What is the objective of the EAT-Lancet Commission?

The Commission, through its report, wants to promote a radical transformation of the way we produce and consume food, based on a “global healthy diet reference”. It attracted however strong criticism even just from the nutritional point of view: several nutritionists pointed out how the “reference diet” pictured by the Commission would be deficient in iron, vitamin B12, retinol, vitamin D3, vitamin K2 and sodium.

A standard diet for the whole planet, regardless of the age, sex, metabolism, general state of health and eating habits of each person, has no scientific justification at all. Moreover, it would mean the destruction of millenary healthy traditional diets which are a full part of the cultural heritage and social harmony in many countries.

*What consequences could the recommendations of the EAT-Lancet Commission actually have?

Consequences on public health are largely unclear but it has already pointed out how the dietary regime indicated by the Commission could actually end up being nutritionally deficient and even dangerous, in the long term, for human health.

What is certain, on the other hand, are the economic consequences of such a “transition”: the food environment revolution advocated by the EAT-Lancet Commission would certainly lead to economic depression, especially in developing countries.

Read as a reference the statement made by the Minister of Agriculture of Ethiopia, which concludes by affirming “My hope is that the report, given the attention it’s receiving, can provide an opening for a more productive exchange on the role of livestock in the developing world.

In fact, I’d like to invite you to take a drive in the Ethiopian countryside. You will see a world where livestock are not part of the problem. They are part of the solution. It’s a much larger, more complex and promising world than the one depicted in the report.” The total or nearly total elimination of foods of animal origin (in particular meat and dairy products) would mean the end of cattle farming and many other activities related to the production of meat. 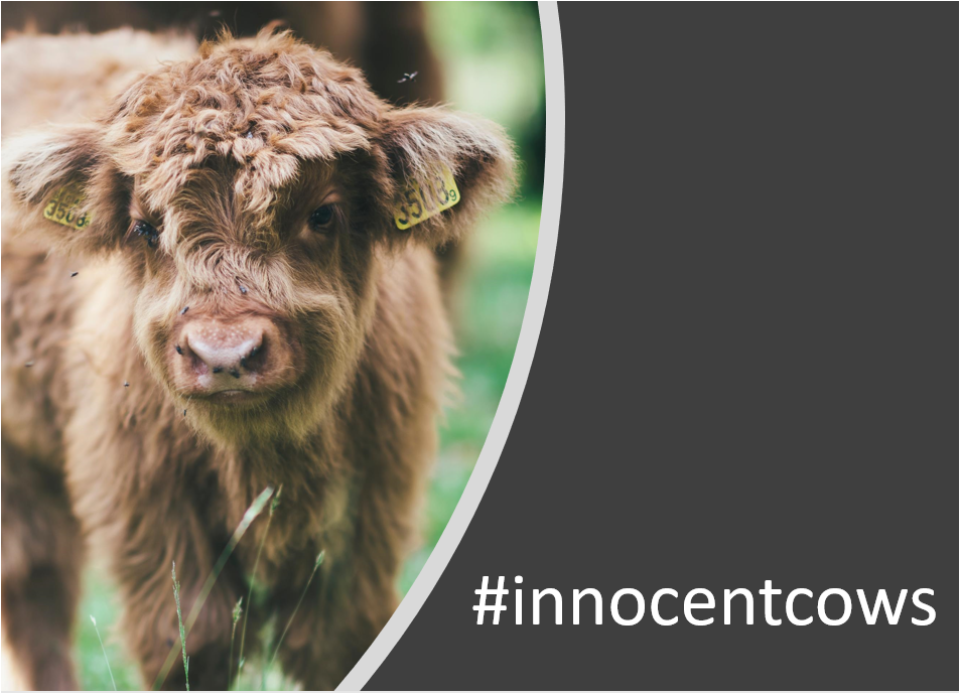